The Fourth Highest Mountain of the World

The fourth highest mountain on earth, Lhotse is also connected to Mount Everest through the South Col. The main summit is 8,516m above the sea level, Lhotse Middle (East) is 8,414m and Lhotse Shar is 8,383m above the sea level and the mountain is located at the border between Tibet (China) and Nepal.

Lhotse is known best for its nearness with Mount Everest and also that the climbers ascending the standard route on that peak spend some time on its northwest face. It has one of the smallest topographic importances of any official eight-thousander mountain as it rises only 610m above the South Col which is why it is often seen as a minor eight-thousander. However, its south face is steepest part of this size in the world. Many failed attempts, some of the notable fatalities and a very few ascents have occurred in this side of the mountain. 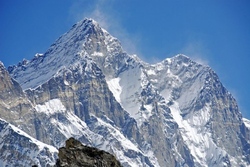 The first attempt on Lhotse was made by the 1955 International Himalayan Expedition headed by Norman Dyhrenfurth which also included two Austrians (cartographer Erwin Schneider and Ernst Senn) and two Swiss (Bruno Spirig and Arthur Spohel) and it was also the first expedition in the Everest area to include Americans (Fred Beckey, George Bell and Richard McGowan). Gaya Nanda Vaidya was the Nepalese liaison officer and they were accompanied by 200 local porters and several Sherpa climbers who after a brief look at the dangerous southern approaches of Lhotse Shar turned their attention to the western and northern face of Lhotse. It happened during September and October when they achieved an altitude of about 8,100m but they were defeated by the unexpectedly strong wind and cold temperature. However, they completed the first map of the Everest area under the direction of Schneider. They also made several short films covering local cultural topics and made in Khumbu region a number of first ascents of smaller peaks.

The first successful climb on the main summit of Lhotse was made by the Swiss team Ernst Reiss and Fritz Luchsinger on May 18, 1956. Zepp Maierl and Rolf Walter of Austria on May 12, 1979, made the first ascent of Lhotse Shar. However, Lhotse Middle had remained the highest unclimbed point on earth for a long time until it was ascended on May 23, 2001 by Eugeny Vinogradsky, Sergei Timofeev, Alexei Bolotov and Petr Kuznetsov of a Russian expedition. A Polish climber Krzysztof Wielicki on 31 December, 1988 completed the first winter ascent of Lhotse.

This fourth highest mountain of the world, however, has faced the death of 11 summiteers and successful attempts made by 243 climbers as of October 2003.