One of the most common foods in the Tharu community of Nepal, Ghonghi is often catered as delicacy, just the way others serve chicken or mutton. Known as escargot in France, where it is served as a delicacy too, this species of snail is served with the ground linseed soup. Usually, this dish is eaten by sucking the snail from its shell and is available all over the market place in Terai where the Tharu community resides.

Although the look of the dish keeps many away from this dish, it is liked by most of the Tharu people, also some others, for a long time now. Although it is similar to the French escargot, there are many differences between these two which can be clearly seen. While the French culinary is fabulous without needing you to suck the snail out of its shell, the dish in Terai is not like that. Nevertheless, despite of how it looks like or how you eat it, for the Terai people, it is nothing less than what escargot is for French. 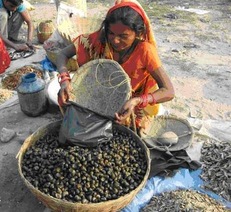 This highly nutritious delicacy (a water snail has 57.5 percent protein and an apple snail has the protein value of 72.9 percent) might have been as popular as momo or chowmein, had there been difference or changes in the recipe. The best time for ghonghi is during the paddy season when rice is planted. During this time, the women and children are often found busy collecting snails from water sources which are then left overnight in a vessel to get rid of the soil and waste inside the snail shells. The next morning they cut the tail which makes it easier to suck the meat out of the shell when it is cooked.

For eating, these snails are boiled and cooked in the way other curries are cooked, however, the most essential part adding the ground linseed which gives consistency to the gravy as well as enhances the taste. The ghonghi is served with rice and this combination, for indigenous people in Terai, had been a staple food for ages now.

There is a belief that this meat provides the immunity power to the indigenous people to fight against malaria when they were the only inhabitants in the densely forested Terai. Also, the old people who had broken bones problem were advised to eat ghonghi as the Tharus believed that the snails build stronger bones. It is also said to clear the bowel movement and keep the eater healthy and was offered to pregnant women as protein supplement. However, the superstitious believers in Terai also considers snails as witch’s weapon and it is said that if you eat a snail smeared with vermilion, you will die within the time fixed by the witch.

Mostly, the snail is popular among the poor people as it is cheap and easily found source of protein. It is also gaining popularity among others besides the Tharu, Rajbanshi, Santhal, Jhangad, Bote, Musahar, etc., however, its harvest from the water sources has led this varieties closer to extinct. Nevertheless, this delicacy has been gaining immense popularity among the people belonging to other communities as well, besides its traditional eaters.