Hari Prasad Rimal, first singer to sing on the radio in Nepal

Born in the year 1982 BS in Lagantol, Kathmandu, Hari Prasad Rimal was the fourth out of six children of Ghanashyam Rimal and Mohankumari Rimal. He was interested in drama and music since his childhood and the cultural programs that used to be organized at the neighborhood highly influenced him. His family were financially stable as his father held officer level post in the palace of the then Rana Prime Minister Dev Sumsher which is why, he his father had appointed a home teacher for to learn and study.

Rimal went to study at Lal Bahadur Maharjan’s house and then joined Durbar High School after sometimes. As his mind was totally influenced by music and drama, he used to bunk school and participate in musical programs, however, he completed secondary level education from Durbar High School. After that, he stopped his studies and started to participate in various musical programs. He reached Taleju Bhawani temple one day and came across the temple priest Sanu Acharya who used to sing and play harmonium. He became friends with the priest and with the priest’s inspiration, he started to dedicate his time and interest more in music.

He was equally good in playing tabla, harmonium and singing and was famous for his singing around Kathmandu. He used to get invited to different places and functions for singing. He was a good actor as well and he had performed as a child artist in the drama named Mukunda Indira written by Bal Krishna Sama. The drama was performed in the Royal palace as well and impressed with his performance, Bal Krishna Sama (who used to teach at Durbar High School) gave him the opportunity of performing in another drama named Prahlad. Juddha Sumsher, who had seen the drama, was immensely impressed and surprised at his acting and singing and gave him five hundred silver coins as reward. After that, he continued his acting and singing career.

In 2007 BS, when the Radio Nepal was first established in Nepal, he became the first singer to sing in the Radio. He sang the song Mero dil tukra banera ekdin aakhako bato bahanecha penned by Sankar Lamichhane and the music composed by Rimal himself. His uncle used to think that he was spoiled as he was involved into music although his other family members had no problems. However, his uncle’s son, Gopal Prasad Rimal used to write him good songs for singing.

He was married to Kishoridevi Adhikari, singer in Radio Nepal, in the year 2011 BS, however, his wife died in a car accident few years later. Later in the year 2014 BS, he remarried a famous news anchor from Radio Nepal, Kalyani Poudel and he has four children with her. Although his songs were popular among the audience and he was interested in music, he could not continue it for a long time. He also served in Radio Nepal and Sanskritik Sansthan in terms of drama for a longtime. Although he used to work as an actor before, he came up as a director then and was dedicated to encourage his actors and was also capable of bringing forward their inner talents. 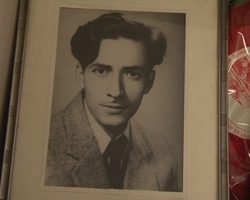 He had performed in about fifty dramas and directed around five hundred audio and video dramas like Muna Madan, K Sakkali K Nakkali, Sarpaka Pailaharu, Bhojan Bhatta, Masan, Yata ki Uta, etc. He also acted on about a dozen movies likes Aama, Hijo Aaha Voli, Pariwartan, Mannko baandh, K ghar k dera, Sindoor, etc. Even though he had sung many songs and directed many dramas, his creations could not be found easily as most of them have been lost. He was awarded with Indrarajyalaxmi Pragya Puraskar, Chinnalata Geet Puraskar, Birendra-Aishworya Sewa Padak, Bal Krishna Sama Foundation Samman (honor) and many other institutions and organizations for his contribution in Nepali music, drama and movies. The first singer to sing on radio in Nepal, Hari Prasad Rimal lives at his house in New Baneshwor.