Born on September 23, 1988 in Pokhara, was the first Nepali international football player Anil Gurung. He was the first Nepali to be selected for a trial for England’s Chelsea Football Club reserve team as well as the Woking Club. He had spent four months in England showing his skills in football with all his expenses covered by Chelsea itself. He also won several trophies and cash awards while he played domestically with the clubs like Three Star Club, New Road Team, Manag Marshyandi Club and Brigade Boys Club. He was already an established player before he went for Chelsea F.C. trials. Although he could not be successful at the trials, he was regarded as the hero in his homeland. 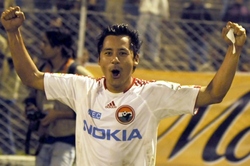 He signed up a contract worth Nrs. 6.3 million with Shillong Lajong FC of India on October 30, 2009 that made him the highest paid footballer in Nepal.  With his lone goal against Pune F.C.in the 3rd E.K. Nayanar Memorial Gold Cup, he helped the club reach the semifinals. He joined the Manang-Marshyandi Club and regained the status of highest paid Nepali footballer after his club relegated.