Hiking is one of the best ways to get closer to the nature. The feel of the cold breeze on your face while you walk by the hills of Nepal watching the view of green and white mountains and Himalayans with the chirping of the birds in the background is just spell bounding. Also, considered good for health, hiking is much easier than trekking. It is one of the popular sports in Nepal. Nepal being the land of hills offers various destinations for hiking. 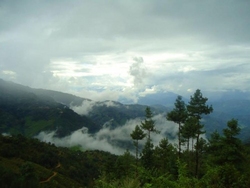 Some of the most popular hiking destinations in Nepal are:

Kakani is one of the most popular hiking destinations in Nepal for the beauty if offers. Hiking to this hill takes you to a small residential area and also to the strawberry farm. The place is famous for the panoramic views of Annapurna Himal, Ganesh Himal, Manaslu and other Himalayans. It is best known for the trout and strawberry farm. Also the view of the Kathmandu valley from the Kakani hill is magnificent. The best time to go here is during April to May when the strawberries farms are filled with the fruits.

The hike to the east of the Kathmandu valley takes you to the village of Nagarkot. This place is famous for watching sunrise and sunset. The hiking trail is also easier compared to other hills. The hike to Nagarkot takes you closer to the ethnic culture of Tamangs, Brahmins and Newars residing in the area. It is a perfect getaway from the chaos of the Kathmandu valley.

Phulchowki, as its name suggest (phul meaning flower in Nepali), is a natural garden of wild roses, yellow jasmine, iris and other native flowers. This peak surrounding the Kathmandu valley is rich orchard of rhododendron of various colors. There is a Buddhist shrine on top of this mountain which, for an average hiker, takes about 3-4 hours to reach. The place looks splendid during the season of the rhododendrons.

Situated at about 10km from Kathmandu is the Nagarjun hill. It is also considered as a sacred place for the Buddhist shrine holding a significant place for Hindus and Buddhists is located here. The place offers panoramic views of different Himalaya. Also situated here is the Nagarjun Durbar that was once used as a holiday home by the former Royals of Nepal.

Situated at the distance of about 32kms on the eastern side of the Kathmandu valley is the ancient town of Dhulikhel. The place is a beautiful combination of natural and cultural heritages. There are several temples, traditional Nepali buildings, rich vegetation, diversity of people and not to forget the splendid view of the snowy Himalayas. Also one day trip to from here will take you to the Nepal-Tibet border or the place called Tatopani, the famous hot spring.

Daman is an ideal place when it comes to viewing some of the highest Himalayas of Nepal. There is a view tower from where one can view the mystifying view of 300 miles of the Himalayan range. Especially the peaks like Mt. Everest, Annapurna, Manaslu, Ganesh Himal, Langtang, Gauri Shankar, etc. could be seen from here. Also, it is a wonderful place to visit during the winter if you love playing with the snow.

The perfect place to experience the urban as well as the rural life is the city of Pokhara. Also known as the lake city, for the number of beautiful lakes found here, the place is rich in natural heritage. Hiking around Pokhara will give you the perfect view of the Fishtail Mountain, Annapurna Himalayan range, Devi’s Fall and also the experience of going inside the caves of Nepal. Around three hours hike takes you to the Sarangkot hill station.

A popular hill station in the western part of Nepal, Sarangkot offers the best views of some of the highest Himalayas of Nepal such as Annapurna, Manaslu, Ganesh Himal, Machhapuchre, etc. It is an ideal place for watching the sunrise. Sarangkot could be reached by bus or about three hours hike from the lake city (Pokhara).

Situated in the western part of Nepal is the land of Gorkha. Known for its brave soldiers, Gorkha is not only rich in history but also in the natural and cultural heritage. The place where the founder of Nepal (Prithvi Narayan Shah) was born is famous for the 16th century Gorkha palace. Also, the temple of the most powerful goddess Kalika, popularly known as Gorakhkali, is situated in the hills of the Gorkha district. An hour hike from the lowlands of Gorkha takes you to the temple which is rich in ancient art and architecture. Also the view of three popular mountain ranges could be seen from here.

Tansen is a beautiful Himalayan town situated on the slope of a hill called Shreenagar Danda (hill) in western Nepal. Also popular as the summer resort of western Nepal, Tansen offers picturesque and most far stretched views of the snow capped Himalayas from Dhaulagiri in the west to Gauri Shankar in the north east.