Himalayan Java, starting of the coffee culture in Nepal

Established in 1999, Himalayan Java is the first specialty coffee house in Nepal. The coffee house was established with a mission of promoting Nepalese coffee industry by investing in people from producer to consumer and to promote locally grown coffee to the international market.

The company has progressed and grown in many areas during this past decade. The coffee house was started with a primary objective of promoting coffee drinking and providing a unique, relaxing, comfortable and clean environment for customers to escape from the pressures of the outside world while they enjoy the hot cup of coffee with their friends. It has become successful in providing highest quality fresh coffee in an appealing environment which is why the customers coming to Java consists mainly of those who want a cup of steaming Himalayan Java coffee and pastries. With its warm service and delicious coffee, it has become a popular local Nepali coffee chain in Kathmandu. 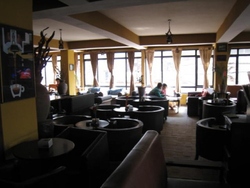 It is not just a coffee house to get in a buy yourself a cup or two, there is more to it. Java is unique place where you can socialize with each other in a comfortable and relaxing environment while you are served the best brewed coffee or espresso and pastries in town. The great ambience, convenient location, friendly customer service and products of consistently high quality helps the customers relieve their daily stress. It has also invested its profits to increase the employee satisfaction along with providing stable return to its owners.

Although it is the most popular and first of its kind coffee chain in Nepal, it has had its share of struggles. When it was started, drinking coffee wasn’t as popular as it is today. However, The World Cup Football 2002 became the turning point for Java as well as its owner Gagan Pradhan. The large screen television set at the café let people experience football with coffee and the experience continued even after the world cup was over starting a New Coffee Culture in Nepal. There was a time when people were disappointed at the new taste of coffee, however, it was the owner’s determination that came true and people realized that this bitter tasting coffee, after all, was better.

One of the reason Java became popular was because of the word of mouth publicity and also the people living abroad, whenever came to Nepal brought friends to Java and the trend of coffee culture in Nepal gradually developed. There are various outlets of Himalayan Java located at different places in Kathmandu, one being at Civil Mall, City Center, Bluebird Mall, Tripureshwor, etc.