Hiranyavarna Mahavihar in Kwabahal of Patan is one of the most amazing structures in the valley with an ancient door guarded by two huge stome lions on either side. It is the largest and most important of all the eighteen vihars in Patan wher the religious rites as written in the holy sutras (religious texts) are followed.

At 3 O’clock in the morning, the Nitya Puja (the main deity worship everyday) takes place here. Behind the main temple and across the large courtyard in between lay the Hiranyavarna Mahavihar Digi (community building), that houses the goddess Chandamaharoshanaya who is commonly known as Sankata. The image of the goddess is enshrined in a small room that is filled with the lights of the butter lamps lit during the puja. At one corner of the roon, an old lady is seated who hands out the butter lamp wicks to devotees. The priests here also does path (invocation of spiritual blessings) on the request of the devotees, however, the paths can last a few minutes or could last for a month and more, depending upon its type. A Karmic Tantra lasting for a week costs around Rs 27000 while the regular ones begins from around Rs 500 each. 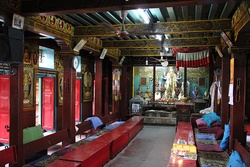 In front of this temple lay the pagoda style three roofed temple of Sakyamuni Buddha. This temple also has a smaller temple in the front which have a gilt pagoda roof and copper patakas (metal banners that descends from the pinnacle) and houses a silver icon of Swayambhu stupa inside. A grand silver statue of Sakyamuni Buddha is enshrined inside the main temple. At all the four corners inside the temple, every morning, a certain amount of rice is kept to feed the mice which are said to live there. This age-old practice has a legend connected to it. According to the legends, the location of the vihar was determined by the then Licchavi King Bhasker Dev Verma (12 century AD) after he saw a golden mouse chasing a cat, similar to his dream of the night before.

There are other images at a higher level around the courtyard including that of Vajra Satva, Namo Sangeeti and goddess Tara and Manjushree along with Mahakal and Guheswori. The vihar houses the replications and images of most of the big deities. A gumba is situated on the northern side on the floor above where the large image of Amoghapasa Lokeswor (eight handed Buddha) is situated at the far end of the room. There is a large prayer wheel near the door and along the walls are the old paubhas. There is almost a six feet tall statue of Amitabha Buddha situated in the Amitabha Sukhawati Bhawan on the first floor on the opposite side. Hiranyavarna Mahavihar is truly an explorer’s delight for its beautiful and captivating structures and details given to the structures.