Located in the Janakpur zone, Sindhuli district covers an area of 2,491sq km with Sindhulimadhi as its district headquarters. This small historically significant valley situated between Mahabharat and Chure ranges has been cleared of forest few years ago. The place contains numerous timber sheds with shop and office building and the new headquarters is growing faster overshadowing the older Sindhuligadi town. 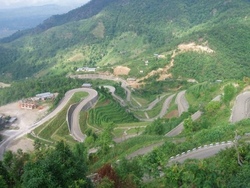 The population of the place mostly consists of Brahmins, Chhetris, Tamangs and Magars who have migrated from the nearby hills. Most of the trade and business in the place is conducted by the Newars from Dhulikhel. After the headquarters of Sindhuli district was shifted from Sindhuligadhi to Sindhulimadi, the old durbar of the district administrator was converted in to a police post. The fort surrounded by a stone wall with an elaborate ground plan has an entrance on the northern side of the durbar and inside it laid a large circular court with entrances at the four cardinal points. The south gallery between the inner and outer court has well made up of bricks and mortar that is about 10 meters deeps while the eastern gallery has a large canon captured from the first British expeditionary force in 1767. This place was the outpost of the Gorkhali that was destroyed the 2,400 strong British force led by Captain Kinlock.

This historically significant valley is bordered by Okhaldunga and Udaypur in the east, Makawanpur and Lalitpur in the west, Kavrepalanchowk and Ramechhap in the north and Dhanusha, Mahottari and Sarlahi in the south. The major rivers in the districts are Bagmati, Kamala, Arun, Thakur Gwang Khola, Bitijor, Baksu Khola, Marin Khola and Rosi Khola and the major tourist attractions of the district are Sindhulimadi, Hariharpurgadi, Sindhulimadi, Dumja and Kamalamaisthan. The language used and the culture practiced in this district consists mostly of Nepali, Tamang, Magar, Danuwar, Newari, Sunuwar, Rai, Sherpa, Gurung, Maithali, Bhojpuri, Abadhi, Tharu and Limbu.