Traveling In the Streets of Kathmandu

Some cities I love instantly. Jammed in traffic from the airport to our hotel, I realised that Kathmandu was not one of them.

My first foray out into the town did little to change my opinion. Just crossing the street—a feat that locals accomplish without even checking for oncoming cars—I was nearly hit by a bus. 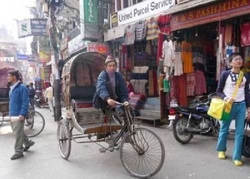 Judging from the onslaught of street hawkers and beggars, it was clear that I looked like a tourist. Was it my crisp white blouse? New hiking boots? Digital camera and tripod? I couldn’t worry about it for long. There was too much to experience.

The scene was intense. Rickshas, three-wheeled taxis, tourists, and peddlers all squeezed into a too-narrow street packed with shops. I could buy just about anything I needed—trekking gear, a city map, digital videotape—and a whole lot of stuff I didn’t.

Within two days my senses were overloaded from the sight of so many temples, the taste of exotic cuisine, the scent of incense, the smell of exhaust, and the sound of honking horns. It was almost a relief to board the plane to Pokhara, our jumping-off point for the trek, and like everyone in the group I was anxious to begin our journey into the Himalayas.

Oddly, when I returned to Kathmandu after nine days on the trail, the city seemed to have been transformed. The clamor and frenzy sounded more like music than noise, and people smiled as if they recognized me. I was now navigating the streets with ease, often ignored by peddlers, despite my camera gear.

What was different? Yes, my boots were muddy and my blouse was stained yellow from the marigolds a Nepalese girl had placed around my neck, but I came back from this trek with more than tired legs and dirty, worn-out clothes.

Kathmandu hadn’t changed; I had.

It was exhilarating to wander into the “real” Kathmandu. I took refuge on an unoccupied corner as dusk began to settle in. In front of me was a small temple, where a woman was making a puja—ritual offering—of flower blossoms, ringing the bell to alert the gods.

As I set up my tripod it occurred to me that my camera was worth five times what the average citizen of Nepal makes in a year. But I was shown over and over again as the trip progressed that, despite extreme poverty and substandard living conditions, these people are spiritually rich beyond measure.