Located at New Baneshwor, Inter Cultural Center Yasashisa Japanese Language School was established on March 1997. It is a registered pioneer institution for learning Japanese language and is also a cultural center. The institute has been supported by Network for Human Interaction Operation (Network HITO) Osaka, Japan and OSAKA YMCA for the smooth operation and quality education it provides to the students.

The two organizations, Network HITO and OSAKA YMCA, have been providing education materials as well as volunteer teachers, who are interested in teaching Japanese language, to the institute along with providing the opportunity for higher studies in various Japanese Universities to the Nepalese students. Along with promoting the Japanese language, the institute has also been playing a vital role in cultural exchange between Nepal and Japan with the cooperation of POOLE GAKUIN UNIVERSITY, Osaka, Japan. Moreover, it has been playing key role in coordination of various programs between Kathmandu University KU and Poole Gakuin University of Japan. 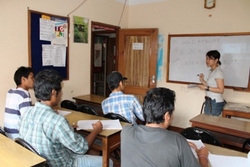 It has adopted the audio/visual method, frequent interaction between the teacher and the students in daily class, regular tests taken at certain interval or at the end of certain lesson for imparting quality language education to the students along with providing model question and answer sheets, practice paper, textbook, work book, meaning book to each student at each semester as well as each level.

Inter Cultural Center Yasashisa Japanese Language School has been conducting various yearly programs such as one year basic level classes, intermediate level classes for three months, advance level classes for nine months, short term private class depending upon the student’s demand and special intensive classes by OSAKA YMCA for a week, once every year. Besides these, the other activities it is involved in are participating in Japanese Language Speech Contest organized by JALTAN, organizing various cultural programs at different time and space, participating in Japanese Language Proficiency Test which is organized jointly by the Japan Foundation and Association of International Education, Japan since 2000, along with celebrating Japan day once a year at the end of Intensive Class. For further details, call at +977-1-4464483 or log on to www.yasashisa.com.np