The only international airport in Nepal

The only international airport in Nepal, Tribhuvan International Airport has one terminal for domestic and one for international flights. It first began as Gauchar Airport, named after the area of Kathmandu where it was situated. In the year 1949, the formal beginning of aviation in Nepal took place with the landing of a lone four-seater, Beechcraft Bonanza aircraft, carrying the Indian ambassador. On 20 February, 1950, the first charter flight took place between Gaucher and Calcutta in a Himalayan Aviation Dakota. The airport was inaugurated by King Mahendra in the year 1955 and was renamed as Tribhuwan Airport in the memory of his late father. Later in the year 1964, it was renamed as Tribhuwan International Airport.

Lufthansa Boeing 707 was the first jet aircraft to land at Tribhuwan International Airport in the year 1967 that landed on the 6,600 feet runway. In 1972, Nepal Airlines Corporation commenced jet operation at the airport with Boeing 727 aircraft and now it is the only International Airport in Nepal. The airport is well equipped and facilitated. It has hangers and parking facilities located at the north of the terminal. The fuel tanks are located at the south of the terminal while the parking lot is set outdoor next to the terminal. The Civil Aviation Authority of Nepal Fire Division also operates the fire station and also handles the crash tenders. 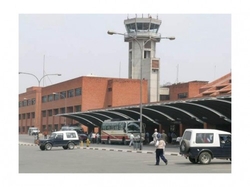 The Radisson Hotel Kathmandu operates an executive lounge for the first and business class passengers for some airlines while the Thai Airways International operates a business lounge for its business-class passengers as well as Star Alliance Gold Card holders. There are about thirty international airlines connecting Nepal to various destinations in Asia, Europe and Middle East. The only international airport of Nepal is about six kilometers from the city center in the Kathmandu valley.