Intimate relationship with the Bagmati River

For more than 80 years now, Bhagwan Das Manandhar has been in intimate relationship with the holy river Bagmati. He started to clean up the sacred river sixty years ago and it has been his daily routine since then.

He used to walk on the banks of the river with his mother when he was a little boy. He started leaning Bagmati since 1950 whenever he went for a bath, offering puja, to play or to take a stroll. He used to walk up to the convergence of Bagmati and Bishnumati in Teku and cleaned the river all the way to the gorge of Chovar up to the isolated river banks of Bungmati. He considered cleaning Bagmati as his Dharma, a part of his duty. 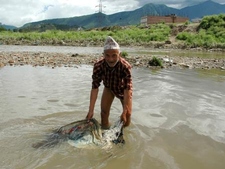 He never wished for any credit or rewards for his work as for him, satisfaction has always been his reward. This simple man from a Newari community never considered Bagmati as a measure to gain profit or bring lucrative projects to make money or a career. For him, Bagmati has always been a serene and pure river mother who helped the Kathmandu valley civilization to flourish under her arms. Bagmati simply became the way of his life, his commitment, his Karma and his Dharma. His eternal duty for the intimate relationship he shared with the Bagmati River.

If only people of Kathmandu valley thought like him, the once pristine and holy river Bagmati would not have lost its glory and still, if the efforts are made, the lost glory of the holy river could be brought back.