King Janaka was the ruler of Mithilla, present day Janakpur, during the Treta Yuga. Although his real name was King Seeradhwaj Janaka, he is commonly known only as King Janaka. He was brave and also as well versed in Shastras and Vedas as any sage would be. He was cited as illustrious example of the Karma yoga in Bhagavad Gita by Lord Krishna. He is also said to be the one who is spiritually advanced and who has gained the state of a rishi, although he was an administrator and not a sage.

According to Ramayana and Mahabharat, Janakas were the race of kings who ruled Videha Kingdom whose capital was Mithila. He was the father of Sita, wife of Lord Rama. He had set a contest to test the strength of the eligible princes wanting to marry his daughter Sita. He asked them to string the bow and whoever could do it would wed her. But none of them could even lift the bow except Lord Rama, who while lifting it broke it into halves. And the wedding ceremony was performed. 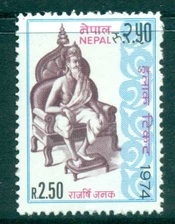 King Janaka had no children so he performed a puja in order to please the god and ask for a child in blessing. He was blessed by goddess Laxmi. It is said that Ravana, demon King who kidnapped Sita in the later part of Ramayana, had killed saints and sages while they were about to perform yagyas. They had cursed him that wherever their blood drops, the land will be barren forever. Ravana poured their blood into a vessel and buried it under the land of Mithila as he wanted to destroy his enemy Janaka. Goddess Laxmi pleased with him asked him to plough the land and when he did, he found a baby inside a basket buried under the land. The baby was Sita, who later became the better-half of Lord Rama.

King Janaka was religious and learned king who was just and believed in serving people. He is one of the heroes born in the land of Nepal. He ruled the Mitila which nowadays, is known as Janakpur and which still has the palace of the King. There is also a temple which is known as Ram–Janaki Mandir where the wedding of Ram and Sita took place and still is performed during the time of Bibaha Panchami. He is also considered as a Rastriya Bibhuti (national hero) of Nepal and the government has also issued a postal stamp in his honor.