Jatra that takes place nowhere else

According to the legends, a very long time ago, a woman in labor pain was calling her mother’s name when Lord Narayan (Vishnu) happened to walk by her in a human guise. Hearing the woman, the Lord asked her to take Lord Narayan’s name instead. But the woman got furious at the stranger’s suggestion and asked him to leave immediately. The Lord felt insulted and furious, he went to the Himalayas. The woman was in great pain and was unable to give birth even after twelve years had passed. The villagers took pity on her and decided to find and bring Lord Narayan to Hadigaun to redeem the poor woman. They found the Lord after a long search and asked him to come with them but the deity refused. On which, one of the villagers told Narayan that if he came to town, they would show him a great jatra that takes place nowhere else in the world and hearing this Narayan promised to visit the town during the occasion. 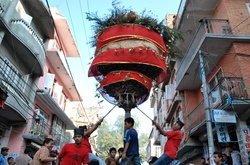 It is said that the Jatra they put up was actually one of its kinds that was held nowhere else and it has now become the identity of the place. It is believed that Narayan was pleased with the Jatra and forgave the woman. The woman gave birth to a baby boy who, being born so late, had a mustache on him. The jatra, since then, is conducted each year to please the Lord.

The preparations for the jatra start on the second day of Dashain and the family of the priest start making wax flowers which are considered a must for the carnival. Then the flowers along with the other offerings are brought from Shivapuri and offered to the Lord’s idols from the priest’s home and they are placed on the top of the khut (chariot). Unlike the in any other jatras, the khuts used in this one are saucer shaped and have the idols at the top and the gajur (pinnacle) at the bottom. This is the only jatra that takes place at night and it starts and ends on the last night of Dashain. Three khuts are taken out from Kotal tole, Nyalma tole and Bhimsen tole respectively and their worship is done by the priests before the khuts circle Hadigaun three times. Each khut represent Brahma, Vishnu and Maheswora, respectively, however, some believe that it represents the woman cursed and later redeemed by Vishu, her child and her husband. Each khut is rotated in a clockwise direction by a man sitting at its base while the khuts are circling Hadigaun as these rounds are believed to bring protection and prosperity to the inhabitants. The khuts are left on the streets for the worshippers to pay their and are gradually dismantled to be set next year, once the rounds are completed.

The festival is celebrated with much delight and people dance, drink, eat and have fun. Although this jatra has become an identity of Hadigaun, other jatras like Gahana Khojne jatra, Ropai jatra, Rath Dubaune jatra, Bhatey jatra and Krishna jatra are also conducted here which makes Hadigaun a place that could be found nowhere else in the world.