One of the districts in eastern region of Nepal, Jhapa also links the eastern border of the country to India. The district accommodates the people belonging to various communities from Indo-Aryan to Burmese origin to others. Also, there are few tea estates in the district. With its district headquarters in Chandragadi, this land of the Mechi River connects Nepal to India from different municipalities located within. The major rivers in the district are Kankai, Mechi, Biring, Ratuwa, Kamal, Ninda and Aduwakhola. Jhapa is easily accessible through regular domestic flight from Kathmandu to Bhadrapur or through bus services from various parts of the country. Some of the municipalities of Jhapa districts are as follows:

A small municipality town in Jhapa district, Damak is located at the either side of the East-West (Mahendra) highway. The population of the place mostly constitutes of people of Indo-Aryan and Burmese origin. Serving as one of the major trade centers in the district, Damak observes people coming from the northern mountain district to sell their goods of seasonal fruits, herbs, hand woven woolen carpets, etc. in the weekly bazaar on Wednesday. It also makes the visit to the inner parts of Jhapa and Morang districts easy. 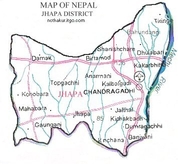 The headquarters of Jhapa district, Bhadrapur is located some 17 km south of the east west highway crossing through Birtamod. Most of the people living here belong to the indigenous tribes such as Rajbanshi, Satar, Santhal, Dhimal and Meche along with the people belonging to other cultural and ethnic groups like Brahmins, Chettri, Newars, etc.

A fast growing township on the cross of east west highway and Bhadrapur – Taplejung road, Birtamod lies 16 km west of the border town and entry point in eastern Nepal, Kakarbhitta. The bus services for Ilam, Phidim and Taplejung begins here and are available up to 2 pm at two hours interval.

A border town in Jhapa district, Kakarbhitta serves as the entry point in the eastern Nepal. An information center is also operated here by the Ministry of Tourism and the visitors entering Nepal from here are given (if required or asked for) trekking permits for eastern region.

Linked with Darjeeling and Sikkim in India by road, Pashupatinagar is a small hill town surrounded by beautiful green hills and forest with thatched village houses considered as an ideal place for sightseeing.