“I remember now that at the time I first learnt to write the letters of the alphabet, I could not share the joy with anyone. I had, nevertheless, mastered the art of scrawling letters even if it was on the bare earth and had learnt to pronounce them although only within my mind. The first day I had been able to scribble the first letter of the consonant क  (Ka), I had sprayed a cloud of dust in the air out of sheer happiness because I had broken innumerable twigs time and again in order to learn writing this letter and I bruised the tender skin rubbing against the soil. Moreover, my toes bled when I practiced writing by dipping them on the dew drops collected on the bowl.” 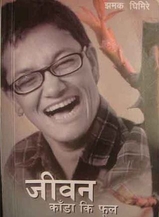 Being born with disability did not stop her from learning to read and write. She used to listen to her sister pronounce the letters and do the same silently. She used to observe how her father caught her sister’s hand and taught her to write the letters in paper. She did it herself but her pencil would either be the dew drops she collected in her feet, bamboo stems or the rocks and her paper would always be the wide and welcoming earth.

Jiwan Kada ki Phool describes her life and her struggle since her childhood. It starts with her early memories of childhood. The care and support she received from her grandmother contrary to the bitter way the society treated her. The feelings of an innocent child growing up amidst the hatred of the society, her feelings and emotions she could never utter a word of. Her anger towards the discrimination she faced from the society for being born physically disabled. Her silent reactions to all those bitter things the society said to her and her struggle for existence and acknowledgement after the death of her grandmother is expressed beautifully in the book. The words and sentences used are quite similar to the day-to-day language used in the villages of Nepal.

Jhamak Ghimire is considered Nepali equivalent of Hellen Keller as both of them suffered from the same disease cerebral palsy. But Ghimire, unlike Keller, belonged to a poor family in a poor country where the parents wished their physically disabled children were rather dead than suffering. She did not receive encouragement or support from her family for learning to read and write. However, she proved herself as one of the most aspiring and promising Nepali authors. Although her life had always been full of struggle and hardship, it never deterred her from her desire to learn. Her determination and strong will-power resulted in giving birth to an aspiring author and one of the most inspirational books of all times.

Jiwan Kada ki Phool is a must read. It is an inspiring book which teaches us that if we are determined to go after something and truly work hard for it, nothing is impossible. The book is a master piece by the author and is the most popular book of 2066-67 B.S. It has been printed seven times within two years making it the Nepali best seller of all times. It has also received many awards. The book is inspirational and encouraging and has something for everyone to learn from. It has recently been translated in English as “A flower in the midst of thorns”.