The start of the trekking routes to breathtaking Rara Lake in Mugu district and Shey Phoksundo National Park spanning Mugu and Dolpa districts, Jumla Bazaar itself can be a trekking destination. The place also served as a road to the sages and pilgrims who came along their way to holy Mount Kailash in Tibet. Located at the distance of about one hour bus drive from Jumla Bazaar is one of the four Tatopanis (hot springs) of Nepal which can serve as a great relieving agent for the trekking pains and warming bodies on chilly days.

The best time to visit Jumla are May/June before the rainy season or just after September/October when the colorful Tila valley (where the bazaar and airfield is situated) is covered by the famous red rice crops that are ready for harvest. You can also devour the ripe Jumla apples which are considered to be the best in the continent, and not to forget the local home brewed apple liquor. 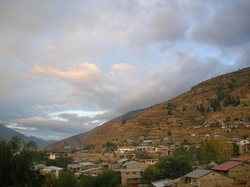 The bazaar also houses a temple of Chandan Nath Baba, a Sadhu who visited the area more than 1,300 years ago and who is said to have brought the rice grains for the locals from Kashmir. The temple cared for by three permanent sadhus also houses idols and temples of other gods like Bhairab, Krishna and Hanuman. Sinja, the area above Jumla is a famous as the home of Nepal’s main dialect which is the ‘Khas Bhasa’.

Also known for its medicinal herbs or the jadibutis, Jumla is the most sought after herb found here is the Yarshagumba. Beside, another popular and important herb found here is Silajeet, a black substance that forms on the sides of cliffs from rainwater, which is considered as one of the important herbs used in Ayurvedic medicine.The place is not only home for the medicinal herbs but also accommodates wildlife. Eagles, falcons, vultures, wild sheep, deer and snow leopards are some of the wild birds and animals living in the area.

Jumla provides the perfect break for those who are bored from trekking and touring the popular destinations of Nepal and want to explore something new, authentic and naturally as well as culturally rich.