The red colored berry that grows in the central Himalayas, mostly in Nepal, India and some parts of China, Kafal has been able to lure most of the people who have tried this once. In the streets of Kathmandu, we can hear the street vendor shouting and notifying people about the arrival of kafal in his deep and loud voice crying ‘Kafal aayo’ (Kafal has come). Within few minutes, he is surrounded by a group of children and grownups interested in buying the kafals he has brought carrying in a woven bamboo basket. 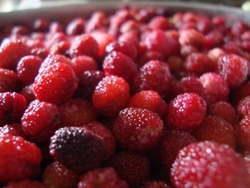 This seasonal fruit ripens during the months of May and June and is preferred by most of the people as afternoons munch for its sweetness and also its tangy flavor. The edible portion, however, is only the outer thin layer as the inner hard and round portion makes up for seed. Kafal that grows usually at altitudes ranging from 1500m to 2500m also has medicinal and other values. It holds important space in the world of Ayurveda with its properties like vishagna (detoxifier), sita prasamana (to relieve cold sensation on the skin), stambhana (which works as an astringent), avedanasthapaka (which works as a pain killer), kanthya (beneficial for the throat) and sukra sodhana (which purifies seminal fluids). According to Susruta, the great Indian physician from around the fourth century AD, not only the fruit, but also its seed and bark of its tree are beneficial for edema, haemoptysis and cardiac debility.

A Nepali Barbet sings ‘kafal pakyo kafal pyako’ (berry is ripe) towards the end of spring when the berry ripens. According to the legends and stories, this song addresses a sentimental tale of brother and sister who lived in the mountains long ago. The brother goes away to join the army leaving his sister along and before he leaves, he makes a promise to his sister that he would return every year if she sends him a message during the season when the kafal fruit ripens. He, however, gets killed in a battle and never returns. The sister still sends her message every year at the time when the berry ripens with the hope of her brother returning until her time of demise. It is said that she returned as a Barbet in her next life and continued sending the same message which we today hear the Nepali Barbet singing.

Also another tale connects Barbet and Koili bird together saying that when Barbet went in search of her brother, the cuckoo heard it and responded with ‘koho’ (who is it?). There are many forms in which the story is depicted and although the tales vary from one locality to another, the craze and wait for the kafal fruit stays the same.