Camping trek is one of the most exciting treks of its kind as you could experience the natural and wild life of Nepal up close. Spending nights inside a tent or camp and enjoying the nature closely as the professional Sherpa cooks and staffs prepare you meal is an experience of a lifetime. Among the various camping treks you could go on, Kanchenjunga BaseCamp trek is one.

The third highest mountain peak of the world, Kanchenjunga offers not only one but two base camp treks for you to explore, namely, Pangpema base camp (5140m) – the main base camp for the mountaineers- and Oaktang base camp. The twenty-one days long trek to base camp of this mountain is one of the most wonderful trekking experiences one could have of the wilderness and remoteness of the area in Nepal.

The trek usually starts from a flight to Biratnagar from Kathmandu and then from Biratnagar to Suketar, by flight (if available) or road. This base camp area is declared as the gift of the Earth which is full of alpine grass lands, rocky outcrops, dense temperate and sub-tropical forests and low river valley. The trek route is situated in the north eastern part of Nepal border by Tiber, China and India and this enchanting area offers some of the excellent displays of blooming rhododendrons, orchids, lilies, primula and many other flowers. The Kanchenjunga Conservation Area spread in an area of 2,035 square kilometers is the must-visit place of this region and should not be avoided in the trek. The conservation area is rich in wildlife diversity including snow leopard, Himalayan black bear, musk deer, red panda, and, impheyan, pheasant, red-billed blue magpie, shy drongo among the birds. 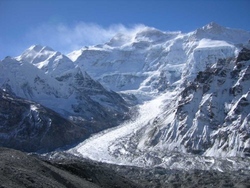 The area is a major inhabitant of Limbu community of Nepal and it is said that they had ruled the Kathmandu valley from the 7th century BC to around 300 AD, after which they moved into the steep hill part of the country in eastern Nepal, from Arun valley to the Sikkim border where they live today. Their Mongolian feature distinguishes them easily from others and most of the men still carry a large Khukuri (traditional curved knife) tucked into their belt and wear a topi. The trekking area, however, is the inhabitant of the Sherpas who have different culture and tradition than those of Solukhumbu district. Other ethnic and caste groups living here are Rais, Chhetris and Brahmans. Also the various monasteries, chhortens, temples, prayer walls indicate the cultural heritage of the region.

Kanchenjunga base camp trekking is one of the must-live experiences that take you closer not only to the natural wilderness of Nepal but also the cultural remoteness.