Named after Mount Kanchenjunga (8,586m, the second highest mountain in Nepal and third highest in the world), Kanchenjunga Conservation Area was declared in March 1998. Covering an area of 2035 sq km in Taplejung district in the northeast corner of Nepal, the conservation area has a unique mountain ecosystem. With Tibet Autonomous Region (TAR) of China to the north and Sikkim, India in the east, the conservation area is envisioned as a tri-national peace park.

Situated in the eastern Himalaya, the Kanchenjunga Conservation Area (KCA) not only has the third highest peak in the world along with various other beautiful peaks but also has a unique collection of plant biodiversity. Twenty three species of rhododendrons are identified growing in the area alone and the rich forests are found to be accommodating more than 250 species of birds and endangered wildlife. The area has many remote and steep valleys, where traditional farming practices are the main source of livelihood, cut by the glacial streams through high ridges. 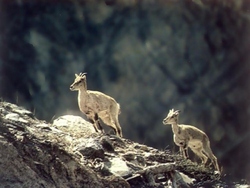 Walking for a few days from here to high-elevation pastures takes you to the grazing land of yaks and the colorful alpne flower bed. The entire area is filled with the various ethnic communities living together who depend on traditional subsistence lifestyles.

The forests that make out most of the land in the Kanchenjunga Conservation Area are comprised of various plant species including Quercus, Castanopsis, rhododendron aboreum, deciduous oaks, maples, laurels, briches, firs, magnolias, junipers, etc., however, most of the original forests of the area have been converted to agricultural land.

The conservation area is not only rich in diversified plant species but also offers spectacular views of the snow capped mountains and the Himalayan range.

To reach the Kanchenjunga Conservation Area, one has to go to Suketar by air and then from Ilam to Phidim and to Taplejung Bazaar by bus. Although the process of getting there might sound lengthy and tiring, the journey as well as the destination is exciting and is one of the must-live experiences of life.