Kasthamandap, the temple made out of a single tree 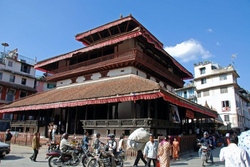 Although its historical background regarding its origin is not certain, Kasthamandap temple is believed to be built in the 12the century by Laxmi Narsingha Malla with the woods of a single tree. The present building was renovated during the seventeenth century. The building has an idol of Gorakhnath at the center the second floor has four idols of Lord Ganesh on its four sides. Also religious texts of Ramayana and Mahabharata are inscribed on the four walls. It is opened during the mid-day until the mid-night and everyone is allowed to go inside. However, taking the photographs inside the temple is strictly prohibited.

The temple is an excellent example of the art and architecture of Nepal because of the wooden carvings and the design of the temple. To this day, the temple has stood steadily without the use of any metal nails or rivets. Kasthamandap is one of the significant cultural heritage of Nepal that stands as an example of the rich Nepali art and architectural legacy of the 12th century.

Legend has it that Saint Gorakhnath attended the chariot procession of Machhindranath in human disguise. Unfortunately, he was recognized by a tantric who cast a spell on him imprisoning him for eternity in the Kathmandu valley. Desperate to free himself from imprisonment, Gorakhnath made a deal with the tantric who needed sufficient materials for building a wooden temple. A giant Sal tree grew in his land which he (tantric) used to construct the temple of Kasthamandap. The temple is also said to have been dedicated to Gorakhnath. The idol of Gorakhnath inside the temple is somewhat confusing as he has always been represented by footprints.

Another legend is found regarding to the missing pinnacle of the temple. The builders of the temple are said to have promised the gods to erect a pinnacle as soon as the price of the oil and that of salt became an equal amount. However, that never happened and the pinnacle was never erected in the temple.