Kathmandu, the land of dreams

The capital city of Nepal, Kathmandu is a land of dreams, for many have come here in search of their dreams, some following their dreams making it a land of opportunity for many.

Kathmandu being the capital city of Nepal makes it an easy target for most of the citizens looking for opportunities because of it being the centre of development. As a result, it has become a jungle of concrete from the jungle of actual trees in the past. The once glorious Kathmandu for its beauty is now famous for its traffic jams, population and pollution. Over the time, it has degraded in terms of beauty and resources although it has developed in terms of infrastructures. 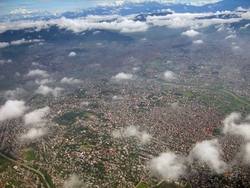 The name Kathmandu is said to have come from the word ‘Kasthamandap’ referring to an ancient temple in the Kathmandu Durbar Square premises. The term ‘Kasthamandap’ refers to ‘a place/building made up of wood’. It is not certain how much woods was required to built the Kathmandu city, but yes, it has used a lot of concrete and bricks, so maybe it is time for us to think about a new name for the city. The city gained popularity after the reign of Prithvi Narayan Shah, who changed the capital from Gorkha to Kathmandu. The kingdom of Kathmandu, as it was before Prithvi Narayan Shah conquered it making it a part of greater Nepal, was the kingdoms of the Malla kings who have a lot of contributions in building some of the famous ancient temples and monuments. It is also said that Kathmandu city was once the kingdom of Kantipur which was beautiful and attractive, the key features that made Prithvi Narayan Shah conquer it in the first place. However, the Kantipur of the past has been replaced by the Kathmandu of today and rather than being naturally beautiful cultural place, it has grown into concrete driven financial, industrial, educational and transportation hub of Nepal. Rather than adding up to its glory and making it more likeable to the people living here, changing it into the capital has made it notorious and synonymous for increased population, pollution and traffic jams and living here has resulted more out of compulsion than a choice.

Nevertheless, we love Kathmandu for the USESCO heritage sites it accommodates, beautiful and ancient temples it boasts of, development of the infrastructures, hospitality of the people, diverse cuisines it offers, living together in harmony that it has taught us, multi-cultural, multi-ethnic and multi-lingual society it incorporates and for connecting us to the world. No matter how it is, it still is our capital, close to our heart for giving place and acceptance to all of us. Kathmandu, the land of dreams, the land of opportunities, Kathmandu is the place where everything begins.