Khapse, one of the most famous Tibetan cookies, is a delicacy traditionally made especially for the Tibetan Lhosar (Tibetan New Year). Nowadays, however, it could be found in Bouddhanath area sold on carts rolled around by vendors on the streets and around the stupa itself.

It is quite easy to make despite of its varied shapes and sizes that make preparing it look more difficult than it really is. All you need is the right amount of flour, sugar, butter and eggs (sometimes a bit of food coloring is also added) to make the dough for the khapse. Once the dough is ready, it is shaped into the various shapes and sizes according to your desires. After cutting it into the desired size and giving it a shape, it is deep fried until it turns golden brown in color. This easy to cook cookie tastes amazing and is popular not only among the Sherpa community in Nepal but anyone who has ever tried it cannot resist the temptation to devour it when they see it. 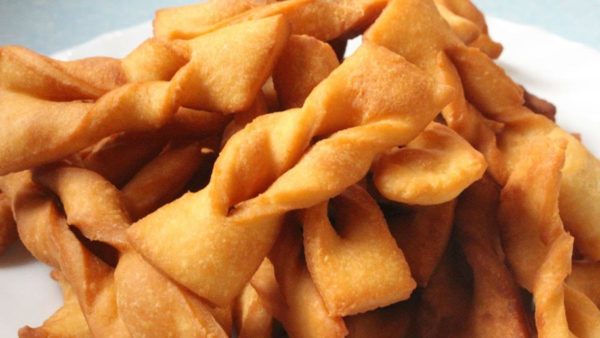 This easy-to-cook small sweet is not just a delicacy but is also a part of a culture and ethnic values. It symbolizes the New Year – the happiness and sweetness of the days ahead – for the Tibetans and Sherpas in Nepal.

If you are willing to try it and aren’t patient enough to wait until Lhosar, then take a walk around Bouddhanath area and you could find fresh khapse being sold in the shops and carts there. You can also find it at the Swayambhunath area, however, without Lhosar being near, it might be a little difficult to find it in Swayambhunath unlike in Boudha.

A Tibetan sweet, made mostly by the Tibetan Sherpas in Nepal, khapse is a popular delicacy during the Lhosar festival and this sweet is a must-try if you have never tried it before. And those who have tried it, well, they know where to find it!