In the far western side of Nepal, stretching over four districts .i.e. Bajhang, Bajura, Achham and Doti;  there’s the newest national park which received designation only in 1985. It is named after Khaptad Swami who was a learned, wise man and a good advisor of Late King Birendra Bir Bikram Shah Dev. It was him who suggested the establishment of this National Park. 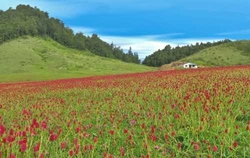 This forest provides habitat for musk deer and barking deer, bears and various species of birds.

Another interesting thing about this park is the presence of a flower called Bheeg, which resembles a white rose and grows in several parts of this park. This flower is extremely poisonous and a single smell could be fatal.