Kheer for holy offering and gatherings

Kheer or rice pudding is one of the important Nepali cuisines used especially during the religious and holy ceremonies. It is also considered as one of the most important elements of puja and is used as Prasad (holy offering). It is considered pure and sacred and used in every pujas be it small or big. It is easy to prepare and tasty to indulge in. 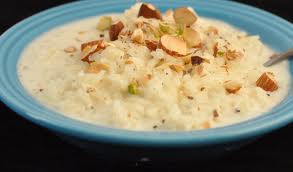 First of all, place a pot on the gas and pour milk in it. Let the milk boil properly. Stir the milk so that the sides will not burn.

Take the rice grains and wash it properly (usually rice grains are washed thrice before cooking in Nepal). When the milk get thick and starts to condense, put the rice grains into the pot. Now stir the mixture well and cook it properly at medium heat. Keep stirring it in between so that the rice will not get struck to the bottom of the pan and burn. Keep checking the rice, the will be soft when it is ready. After a while, add sugar and stir well so that the sugar mixes well with the Kheer.

About five minutes before turning off the heat, pour the chopped dry fruits into the Kheer and stir it well. The rice grains turn soft and the milk is absorbed by the grains when it is cooked. And rather than being liquid, the Kheer looks like a thick paste.

It is a popular holy offering made during the religious rituals and rites. And also, the 15th day of the Nepali month of Shrawan is considered as the day to eat Kheer, locally known as ‘Kheer khane din’. It is also used as sweet dish during the family gatherings and get-togethers. Some people like to eat it while it still is warm but it tastes best when it is chilled. So, let the Kheer get cool first and then refrigerate it for before indulging yourself in the delicious taste of the Kheer.