Born on 11 June 1920 to King Tribhuvan Bir Bikram Shah Dev, King Mahendra Bir Bikram Shah Dev ruled Nepal since 1955 to 1972. During the time he was born, the governance of the country was in control of the Rana Prime Ministers and the King was captive in his palace along with his family. They were powerless and it was only during the 1950s that the King, along with his people overthrew the century old Rana reign and established democracy in the country. So, by the time King Mahendra came to power, Nepal was a democratic country.

He ascended the throne in the year 1956 after the death of his father. Although he was made the king of the democratic country, on 15 December 1960, he suspended the constitution, dissolved parliament, dismissed the cabinet and imposed direct rule imprisoning the then Prime Minister Bishweshwar Prasad Koirala and his closest government colleagues. He established the Panchyat hierarchical system of village, district and national councils and pursued a foreign policy of neutrality between China and India. 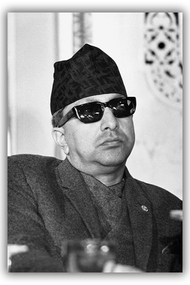 He was married to Indra Rajya Laxmi, the daughter of General Hari Sumsher Rana in the year 1940 and had six children, three sons named Birendra, Gyanendra and Dhirendra and three daughters Shanti, Sharada and Shobha. In the year 1950, the queen died and he married her sister Ratna Rajya Lakshmi Devi after two years. They, however, had no children together.

In 1960, he was made a British Field Marshal. He implemented a land reform policy that provided land to many landless people. The Mahendra Highway, commonly known as the East-West Highway that runs along the entire Terai belt in southern Nepal was also constructed during his period. He holds key responsibility in making Nepal a member of the United Nations.

While his hunting expedition in Chitwan with Tiger Tops Hotel proprietor John Coapman (also associated with the CIA at the time), King Mahendra Bir Bikram Shah Dev had suffered a heart attack and was reported to have died in the arms of Coapman in 1972 in Bharatpur. His eldest son Birendra ascended the throne on February 1975 but died on 1 June 2001 along with his family (wife, sons and daughter) and siblings Dhirendra, Shanti and Sharada while his sister Shobha survived the wounds and Gyanendra was not present there in the Nepalese Royal Massacre. Queen Mother Ratna, his widow is still alive and lives in a part (her residence since the beginning) of the Narayanhiti Palace, now a museum (as of January 2013).