Kiran Giri, rising into the world of video editing

Born on Jestha 26, 2046 BS, Kiran Giri is on the way of becoming a household name in the Nepali movie editing scenario. This young editor involved in the industry for past few years (by the end of 2006), began his career by assisting his maternal uncle Shiva Puri, whom he considers as his teacher (guru) for introducing him and guiding him into the world of video editing. 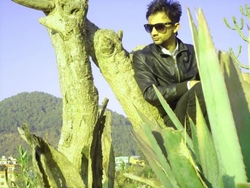 He entered into the world of movie editing with Tridev (directed by Ramkaji Ghimire and Produced by Manoj KC)  as his  first project he had edited on his own. He began his career working as an assistant editor in various television series, documentaries and movies for a couple of years after which he started to edit the movies on his own. Within the short period of time, he has been successful to establish himself as one of the most aspiring editors in the world of video editing and has added more than fifty music videos, over two dozen documentaries and several short movies to his credit. He has edited about five movies and has also directed a music video for the song ‘Ma ruda timilai’ by Nabin Poudel (by the end of 2012).

The Nepali video editor Kiran Giri credits his mother and his maternal uncle for getting him to the place his is in today and although he never thought he would end up being a video editor, he is determined to be one of the bests in the industry. And although he could not predict the future, he is committed in making the best of everything he does. Rather than his interest, it was the environment and the circumstances that brought the ‘second don’ title holder of Taekwondo into the field of video editing that he has grown to love now. The one who loves his work as an editor today did not have a formal training in the subject and whatever he has achieved today is the result of his dedication and commitment towards the work he takes up. One who is set on the path of becoming a successful and probably one of the best editors in the Nepali entertainment industry, Kiran Giri is pursuing his Masters level education (2013) along with being committed to his work in the industry.