Kirantis are said to be the oldest ruling dynasty of Nepal valley (as Kathmandu valley was called back then) which ruled the kingdom for more than 700 years before the birth of Christ. About thirty two Kiranti rulers have been identified by the historians, with Yalamber, who has also been mentioned in the Hindu holy epic Mahabharat, as the first one. It is also said that the army of Kirantis, too, had fought in the epic battle and if we followed the legend, we will come to know that when Lord Krishna had asked Yalamber whose side he was, he had replied ‘the weaker side’ and it was after hearing this that Krishna beheaded him and hanged his head on a tree so he could watch the battle (as he had requested before being beheaded). Another legend says that the Lord cut his head with such a blow that it directly landed on the Nepal valley and it is believed to be the same mask that is kept at Akash Bhairav temple in Indrachowk.

Mostly the Rai, Yakha and the Limbu groups are known as Kirantis and they also have their own set of religion different from Hindu or Buddhist which are most prevalent in Nepal. Although they worship Lord Shiva on regular basis, they are said to be influenced by Shaivites during the ancient time. Rai, who actually is Khambu, is believed to have got the title probably by the conquering Shah dynasty. It is also said that one of the oldest towns in Kathmandu, Patan was found by Kirantis in the third century and was later expanded by the Lichhavis in sixth century with further expansion by the Mallas in during the medieval period. Legend has it that the Kirantis first ruled Nepal valley from their palace in Gorkarna until they were driven out by the Lichhavis which made them to settle in Shankhamul leading to establish the city of Patan. 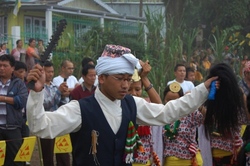 The Newar name of Patan ‘Yala‘ is said to be named after Yalamber. There is an archaeological site near the Patan Durbar Square which is believed to be the remains of his Palace. Although there are very less information about the dynasty, numerous legends and tips hinting of their presence are found and also many festivals, rituals, icons and names of places in the Kathmandu valley are believed to have existed since Kiranti period. Also, a neighborhood in Patan going by the name Chyasal is said to be the burial ground for eight hundred Kiranti soldiers who fell during the Lichhavi conquest.

A scholar has talked about the Bal Kumari temple of Chyagal, Patan being a Kiranti temple originally. Moreover, many temples around the city of Patan dates back to the Kiranti period and are mostly in rectangular shape housing Bhairav or Bhimsen, as well as Bal Kumari Ajima and various other mother goddesses they worshiped. These temples are said to have been renovated during the Malla times. Two sites in Patan, Siddhalaxmi temple near Tyagal tole and Tikhel in southwest of the old city, maintains the traditional ties of Kirantis, to this day.

After they were overthrown by the Lichhavis, they settled in the eastern areas of Nepal, namely, Tamakoshi and Arun river valleys. A book also mentions Jyapus as the descendants of the ancient Kirants of Kathmandu valley.

A forest named Hattiban on the way to Godavari still witness the pujas conducted by the Kiranti people to this day along with the puja held at the Kirateshwor Mahadev near Pashupatinath temple, which also served as the burial ground for many Kirantis in the past. Udhauli and Ubhauli are two of the main pujas of Kirantis that are held at both the temples and are attended by large number of Kirant devotees. Also, during Shivaratri, a big eight-day puja is held along with the Mahaguru puja (great guru of Kirants) on the occasion of his birth anniversary.

In 2000, three committees The Kendriya Karya Samiti, The Mahila Samiti and a Puja Samiti were formed that works in the preservation and conservation of the Kirant culture along with ensuring their rights.