It is September, the season of kite flying in Kathmandu. Rising above the city’s skyline and up above the buildings, the blue sky is dotted with colourful kites everywhere. Hundreds of kites glide elegantly and fight a fierce battle to be the last remaining kite in the sky. 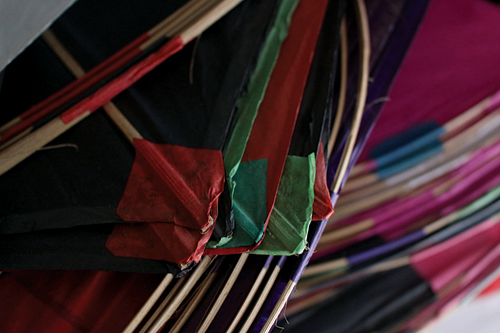 The Nepali kites are mostly made of lokta paper, which is hand-made. Because the kites do not come with a tail, people attach the tail themselves. The kite flying apparatus consists of the kite, the wooden reel with two spools on either side which you have to hold in your hands to manipulate the kite as it is airborne. Miles and miles of string are rolled onto the reel. The string is often fortified with homemade manja, a mixture of crushed glass and thick adhesive. The strength of the string depends on the quality of the mixture.

The kite fights are intense. One kite tries to cut the other kite’s string loose. Only the kites with the strongest strings survive. Thus, the manja fortified strings strikes a terror on unsuspecting kites.

Many a times, children watch the duel and wait for something more valuable. Whenever a kite is cut loose, it falls to the ground. Children rush towards the falling kite.  When any child is a clear winner of the bruised and battered kite, he/she spends hours trying to resurrect it and let it fly one more time in the hopes that it might be able to challenge other kites in the sky.  And when it does, the kite becomes a symbol of inspiration and a hope to restore lost glory.