Lamppost Bata Khaseko Jun by Manu Manjil is an anthology of poems that has been successful to establish him as an ambitious and influential poet of modern times. He, in the preface of the book, defends the poetry against the accusations that has been made by prose writers (who mentions that its scope is limited) giving many accounts of sidelining of poets and their neglect.

The poems in the book are filled with wit, intellectual tide, explosive awareness which, in spite of being free verse, is combined with the melody and tune. The poems are filled with metaphors, similes and other rhetoric that creates analogy and makes the vivid contrast between familiar things with those that are less familiar along with the depiction of realities found in contemporary Nepali society. The characters have different psychological backgrounds with some being fearful, frightened while others being jubilant or hidden, etc. The poems can be characterized in two parts, dynamic art for the use of figurative language in flexible way and expressive art due to the heaps of emotions and feelings it carries. 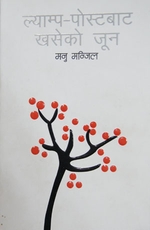 There are forty six poems in the anthology, all of which are written in free verse with an acute combination of musicality, sound, rhythm and emotion. All the poems carry important messages for the readers and the meaning hidden in the poems are vast and sometimes difficult to understand although the words he uses are simple. His first poem in the book, Gaule Ek Baalak Samjhera presents the subtle optimism where he wishes many things to happen like seeing the smile of the boy on meeting him. Another poem titled Dushman presents the contrasts and uses of different images to describe the nature and behavior of enemy. Quite complex and very advanced poem in the anthology is Lamppost where the poet has used multiple similes, metaphors, images and contrasts presenting the pure contrast between a life and a lamppost. The poems like Yo Sahar Kasko Ho, Dashain, Bagh, etc. are very influential and are unique in nature filled with contemporary awareness. The poet has presented the real life issues in a simple language filled with images in his poems making his poems worth recitation.

Manu Manjil, in his poetic anthology Lamppost Bata Khaseko Jun, has given the realistic presentation of the Nepali society making his poems worth recitation.