The land of brave Gurkhas

Situated at the distance of about 25 km off the main highway connecting Pokhara and Kathmandu is the beautiful ancient town Gorkha. Gorkha is one of the most important parts of the Nepali history as it was the land of brave Gurkha soldiers and the birthplace of the creator of greater Nepal, King Prithvi Narayan Shah. Before the unification process began, Nepal was divided into fifty tiny states, Gorkha being one of them. It was King Prithvi Narayan Shah, initiallythekingof Gorkha, who united all the scattered kingdoms into one. Hence, this place has an important historical value in Nepal and its unification process. 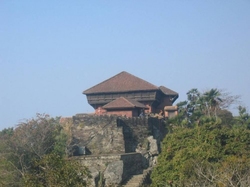 This place not only has historical values but is also culturally and religiously significant. The presence of the Gorkha palace makes it one of the interesting tourist destinations, as the curiosity looms among the people about the lifestyle of the brave Shah King who dreamed and dared to fulfill his dream of unifying the small kingdoms into greater Nepal. The palace resides on top of a hill and it is said that the king used to watch his people as far as his eyes could see from the tallest palace in the center of Nepal.

It is equally significant from religious point of view as well, as the presence of the famous Gorakhkali temple makes it an important Hindu pilgrimage site. The temple lay atop a hill and from there, the view below looks splendid and breathtaking. The majestic Himalayas in the background with the valley of Gorkha in the front are just amazing.

Gorkha is also the land of the brave Gurkha warriors who fought bravely with knives against the guns during the Anglo-Nepal war. The brave Gorkhali soldiers are still famous all over the world and the stories of their bravery have never gotten old. From Nepal to the US to Britain, everyone everywhere sings the praise of the bravery of a Gorkha soldier.