Born to father Mohanlal Shrestha and mother Champa Devi Shrestha in the year 1982 BS, musician Natikaji is given the title ‘Sangit Siromani’ for his immense contributions in Nepali music scenario. He had lost his parents when he was small, so, he was raised by his maternal family in Guheswori. His grandfather was a priest and he used to tag along with his grandfather and participated in various bhajan programs organized in Pashupati and Guheswori temple. He developed his interest in music during this time and today, he is known as the most important figure in Nepali music industry.

He, with his friends, 2004/5 B.S, collaborated with Krishna Manandhar and created a drama named Jiwanjyoti. He was interested in music and he never left any opportunities of singing amidst his friends, family or the bhajan group. He went to Radio Nepal in the year 2007 BS and after a year on Baishak 15 2008 BS, he was appointed for a job. He broadcasted (sang) his song jaba Prem chutyo Roera K Garu, live for the first time in Radio Nepal. He himself was the lyricist, music composer and singer of the song. The song Pahad basi banma kheli hurkeki akeli by Puspha Nepali was the first song to be recorded in his voice. King Tribhuwan gave him Rs 600 to record this song in a disk in Kolkata in the year 2009 BS. 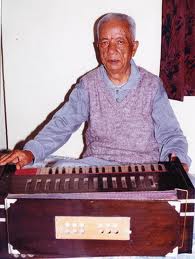 Initially, he used to write his song himself and his songs were popular among the listeners as well. After recording around 200 songs, he stopped singing and started solely focusing on composing music since 2016/17 BS. There was a time when there were no music to be played in Radios and Natikaji belonged to that period. During that time, people (in radio) used to dub Hindi music with exact Nepali lyrics and used to play it. It was the time he entered Radio Nepal, so even his songs were found to be highly influenced by Hindi songs. Later, he used the Nepali folk tune, Newari folk tune and Classical music as a based to create music of his own and his songs became more and more Nepali flavored.

He believed in creating music as per the feelings and emotions of the songs and was careful about the pronunciation of the words. He was a popular singer as well as musician and had a huge fan following, also impressed and in love with his looks were many females. He got married in 2017 BS to a nurse working in Bir Hospital. His wife Saraswati Rajbhandari was his family’s choice and they had three daughters Sangit, Kabita and Sabita. Although he was totally involved into music, he did not allow his daughters to enter into the field fearing there would be no future for them.

He had passed his SLC from Pashupati Pathshala and joined Tri-Chandra College for his I.A. after a year of his marriage. However, he could not continue his studies because of the family responsibility and his work. In the year 1973, he completed his B. Mus. from in classical music from Prayag Sangot Samiti, Ilahabad.

The period between 2020 BS and 2040 BS is considered as the Golden Era for Nepali music and Natikaji is an important figure of this era. This was the time when his various works were released and he became the man behind the establishment of what we call modern Nepali music today. He has created music for various artists like Prem Dhoj Pradhan, Tara Devi, Yogesh Baidhya, Rubi Joshi, Fatteman, Udit Narayan Jha, Ram Krishna Dhakal, Yam Baral, etc.

He used to read every word of the song twice or thrice and used to hum the tune. After that, he used to light a cigarette and sing the song playing rhythm in the harmonium. This is how he created music. His music was popular in the palace as well and the members of the Royal family admired him a lot. His music were the perfect match for the lyrics written by Chandni Shah and the songs created as an effort of their collaboration were popular among the listeners as well.

He was gradually promoted from department officer to the musician equivalent to the post of an undersecretary and in the year 2046 BS, he retired from Radio Nepal because of his age. His gave music to variety of songs like modern, film, Newari, national, folk. Pijarako Suuga, Kunjini, Hami Afnai Bharma Jiudai Chau, Bhakta Prahlad, Prithvi Narayan Shahka Char Pakshya, etc. are few of the musical drama create by him. He also gave music to the songs of the movies like Mann ko baandh, Sindoor, 25 Basanta. Shantidip, Chelibeti, etc. 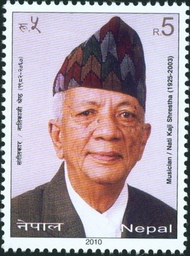 He was awarded with the Subal Gorkha Dakshin Bahu 1st, Tri-Shakti Pat, Indrarajyalaxmi Rajya Pragya Puraskar, Chinnalata Puraskar, Bhupalman Singh Sangit Puraskar, Narayan Gopal Puraskar, etc. The Nepali government has also created a postal stamp worth rupees five in his honor. He created music for around 4000 songs during his lifetime among which some had been successful to touch the heart of the listeners. He used to create music even when he lay sick on his bed. He was suffering from heart and nerve disease, Parkinson, for a long time.

The most important and prominent personality, the legend involved in giving birth to the modern Nepali music Natikaji died on 16 Kartik, 2060 leaving behind the melodious and heart touching music and songs he created.