Robin Tamang, a legendary singer of Nepal, has been in the Nepali music Industry for the past two decades and has gathered too many fans during that time. Born in Singapore, he was youngest of five siblings born to the family of a British Army. Due to the different postings of his father, he had to move from one country to another and by the age of 17, he already had lived in Hong Kong, Singapore and Brunei. Being born to a family of music lovers became an inspiration to him to grow as a singer. 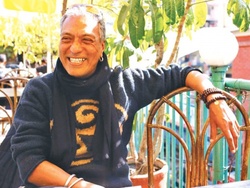 During his schooling in Singapore, he would listen to old rock, Jimmy Hendrix and Deep Purple who became the true inspirations to him. It was around this time that he formed his first band F Troop and performed at school. While in Humber College in Toronto, in mid 80s, he formed his second band, Tamang and performed at different stages. In 1996, he got a chance to come and settle in Nepal. He went to Pokhara as his father used to stay there and there he got a chance to join the band Looza. He performed together with Looza but soon this journey came to an end after the group disbanded in 2005. Then, he continued with other musicians and formed the band Robin and the New Revolution that had Rajesh on Drums, Dipesh on guitar, Prabin on bass and Tamang on vocals. Together they released their first album ‘Keta Keti’ which was a huge hit that gave him a huge fan following. Although he is widely known and popular as a musician, he has appeared in a Nepali movie named ‘Chadke’– a gangster flick. He says that acting and music are linked to human emotion and expression which comes naturally. Although he appeared in a movie, he does not have any intention of leaving the music field.

Robin Tamang, the legend, has a great dedication towards the music. He has been performing in Nepal in stage shows for over two decades and has gathered many fans. It is said that whenever he performs, the whole stage comes alive and the audiences are left mesmerized. Although he was born in other country, he made his music career in his motherland which proves how much love and affection he has towards his nation and he has also become a source of inspiration to young generation.