She was born to the family of Albert Sinha, a Nepalese Christian family who had named her Alda. However, her friends at school used to tease her calling Dalda, a branded vegetable oil of India, which is why she changed her name to Mala, meaning garland.

She started her acting career as a child artist in Bengali Film Jai Vaishno Devi and went on to star in Shree Krishna Leela, Jog Biyog and Dhooli. Bengali film director Ardhendu Bose being impressed with her acting in a school play took permission from her father to cast her in his movie Roshanara (1952) which became her cinematic debut. When she had gone to Bombay to shoot for a Bengali film, she met Geeta Bali who introduced her to director Kidar Sharma. He casted her as a heroine in his film Rangeen Ratein, however, her first Hindi film was Badshah. Although she had worked in about three films, she got recognition from Kishore Sahu’s Hamlet. 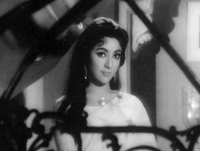 She also used to sing for All India Radio but was never allowed playback singing in the movies. She was casted by Guru Dutt in his movie Pyaasa which became the turning point in her career with its story and her excellent performance. She had worked with many new comers as well as the superstars of the period.

She came to Nepal to act in a Nepali movie called Maitighar (1966) and married her costar in the movie C.P. Lohani.  However, they had a long distance marriage from the beginning since he was based in Kathmandu to look after his business and she was in Bombay living with their daughter Pratibha as she had continued acting even after her marriage.

She has worked in Nepali as well as Bengali films and along with her growing age, her choice of roles also varied. The Indian actress of Nepali ethnicity, Mala Sinha was seen in the movie was Zid (1994), her last movie.