Mani Rimdu, a festival up in the Himalayas

Mani Rimdu, a 19-day series of sacred ceremonies concluding in a public festival lasting for three days is a point of attraction for tourists all over the world. The festival falls in autumn, the best season to trek in the pristine mountains and Himalayas of Nepal. So, one can enjoy and experience Mani Rimdu along with the trek package in Nepal. Mani Rimdu is an opportunity for Sherpas and Tibetans to assemble and celebrate together with the Lamas, monks and monasteries. 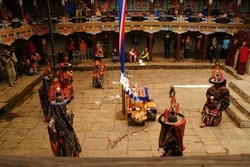 After the sanctification of monastery, the monks perform the special mask dance at the place. This elaborate and meaningful dance played for three full days is the main show of the festival. It attracts a huge crowd. The dance symbolizes the restoration of the set up of Buddhism in Tibet and depicts the victory of Buddhism over the ancient Bon religion. The dance starts with a monk, playing master of ceremonies, dramatically pushing the audience back to clear an area around the courtyard of the monastery for the dancers. Heralds and incense bearers appear in the monastery entrance and slowly walk down the steps in single file, followed by musicians, some blowing bugles and clarions, while others beating drums and clash cymbals. Clapping and cheering by spectators are considered unnecessary and inappropriate, so the audience watches in silence.

The first dance begins with eight dancers in vibrant costumes sweeping down into the courtyard. They move in clockwise circles around the altar making offerings of food and drink to the Buddhist gods. The shrieking of horns and loud drumming precedes the much anticipated dance of Padmasambhaya, who is considered to be a second Buddha in Tibet. At last, Padmasambhaya slowly emerges from the monastery. In his right hand he holds a Vajra (thunderbolt of the gods), while in his left hand he wields a sacred dagger to be used in fighting off the demons. This dance is symbolic of the defeat of the evil spirits of the Bon religion by Buddhism. The Dance of the Celestial Drums, which follows, is a celebration of this victory.

The remaining dances of the day depict various aspects of life, many with a humorous twist to them. As the Mani Rimdu day draws to a close, rolls of parchment with ritual prayers written on them are burnt, to the accompaniment of chanted prayers. Everyone can rest, assured that goodness and peace will reign once more – all evil demons have been banished.