Marriage in Nepal is a family affair, unlike most of the Western countries. The parents are responsible for selecting suitable spouse for their children, hence, most of the marriages in Nepal are arranged. Every community has their own specific culture and style. However, they are more or less similar in case of Nepal. 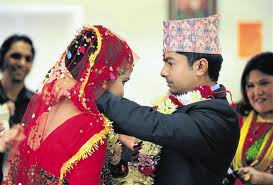 Once the word spreads for the search of eligible spouse, various proposals come from the other parties. From there, a suitable groom/spouse is chosen on the basis of their caste, class and educational background. Also their character is observed and if they pass in all these criteria, then with the approval of the would-be spouses, the marriage date is fixed. Usually in such cases, the Lahmi (middle wo/man) brings the proposal and if everything goes well then they are rewarded for bringing the best proposal.

Also matching the horoscope of the boy and the girl is considered important for happy marital life. They are compared and a date is set for the marriage ceremony. Before the actual wedding, most of the time, a small or an elaborate engagement ceremony (depending upon the financial status of the bride’s family) takes place. Here, a male member from the bride’s party presents the ring to the groom and vice versa. Also the bride’s party gives presents to the groom’s side.

On the actual wedding day, the bride’s party comes to the wedding venue (if it is different from bride’s house) earlier than the groom’s party (Janti) in order to welcome them. The groom waits in the vehicle for his in-laws come and invite him in. Some members of the Janti goes first carrying several trays (Saipato) one with a letter of invitation for the wedding from the groom, and others with fruit, dry fruits, clothes and jewelries, etc. which is later returned back with the bride. Then the Swayambar takes place where the bride and groom exchange their garland and rings. Later, they are taken to the Jaggey (a sitting place decorated with flowers and fire lit in the middle) where the marriage rituals are performed. The parents do the Kanyadaan (giving away the daughter into the hands of the groom) and the groom puts Sindur and Potey (Vermillion powder and bead necklace) to the bride declaring her to be his wife. Feasts and gifts are followed by the bidai (leave) of the bride that ends the wedding ceremony.