One of the many ways of making dishes out of fish is making the Masala (Spiced) Fish, the process for which is given below:

5 medium onions, 5 cloves of garlic and 1 inch ginger made into a paste 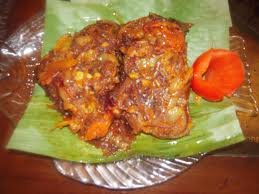 First of all, wash and clean the fish fillet and marinate it with turmeric, salt and lime juice leaving it aside for ten to fifteen minutes. Then, in a non-stick pan, heat two tablespoon of oil and shallow fry the fish pieces on both sides over medium heat. When done, take it out of heat and keep it aside.

Now, in the same pan, heat three to four tablespoon of oil and when the oil is heated, add the whole red chilies and bay leaves. Sauté it for about a minute and add the chopped tomatoes cooking it until it becomes tender. Then, add the turmeric, salt and chili powder and mix it well. Now, add the onion, ginger and garlic paste and mix thoroughly cooking it for about ten to fifteen minutes till the masala is cooked and the oil is comes out from the masala. Add half a cup of water and bring it to boil. Then, add the fish fillet to the masala and cook it for five to ten minutes until the fish is nicely cooked and soaked into the masala and oil is separated from it. Serve it hot with steamed rice (it tastes great with brown rice).