Mata Tirtha Aunsi is a festival for mothers as it is the Nepali Mother’s Day, which falls on the Nepali first month Baisakh (April/May). It falls on the last day of the dark fortnight of April or early May. It is a day to show the love and gratitude to one’s mother. 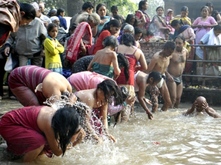 The festival of mother’s day has no special celebrations as such. There is not a predetermined ritual or event to perform by all but it depends upon people. People show their love and appreciation to their mother by spending time with her, cooking for her and buying her gifts. The children who live away from their mother come to visit her with gifts or sweets. Even the little children save their pocket money to buy gifts for their mother.

Mata Tirtha Aunsi is also called Aamako Mukh Herne Din (Day for seeing Mother’s face) in local language these days. Children wake up early, take bath and come to visit their mother early in the morning with gifts or sweets. Those who are farther might come a day earlier and spend the next day with her or might come later during the day. Those who have lost their mother pay homage to the Mata Tirtha, sacred pilgrimage bathing that lies six miles southwest of Central Kathmandu. It consists of two pools, the larger one is for bathing and the smaller one where one “looks upon their mother’s face”.

According to the legends, during the rule of cowherds in Nepal, one of the cowherds lost his mother and was so depressed that he went to make offerings at a water storage pond in the forest. Amazingly, he saw his mother’s face appear in the water and accept his offerings. From that day on, this day was known as Mata Tirtha Aunsi, the Nepali Mother’s day. People believe that coming to this place and paying homage on this day brings peace to the departed soul of their mother.

Hence, the festival of mother’s day is important in Nepali society as it is the day the children express their love and gratitude to their mothers. It is the day to make your mother feel important and loved.