Prasan Syangden is a well known name in the field of Nepali entertainment media. He has been successful to win the hearts of many people and create a huge fan following for himself as an RJ in Radio Kantipur, Radio Rastrako. He, along with his brother Ashish Syangden, are popular RJ duos who hosts the radio program named Music Jam. Besides being a RJ, he is also a human rights defender and the General Secretary of an organization named R.I.S.E (Rights of Individuals for Social Empowerment). 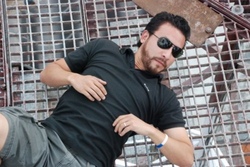 He has been active in his media career as well as in advocating various issues. He was also involved in a workshop on Human Trafficking held on 2nd December 2007, in association with UNODC (United Nations Office on Drugs and Crime). Besides advocating on issues of Human Trafficking, he is also an avid advocator of ending the culture of impunity in Nepal as he feels that the victims are routinely denied justice because the perpetrators of human rights violations continuously enjoy impunity, which has become a major challenge for the country that is trying to enter into a new phase.

Involved with the entertainment business for more than a decade, he had chosen the path of activism to fight for a cause. Unlike his job in the media house, activism for him is not a tool of making a life rather it is a platform to fight for a cause, to fight against injustice. During his decade long career in the media business, he has not only worked as an RJ for the Radio Kantipur but has also hosted several programs, on television as well as live programs on stage and has also tried his hands in modeling.

With his built, voice and personality, Prasan Syangden has been able to make many girls go wooing about him and many boys considering him as their idol. This talented personality is a youth icon not only for his on-air confidence as a media personality but also as a youth activist who has been advocating for some of the major and critical issues like human trafficking, drug abuse and ending impunity in the country among the others.