Mero Euta Sathi Cha (I have a Friend) is a new generation romantic Nepali movie directed by Sudarshan Thapa. The 2009 movie starring Aryan Sigdel, Namrata Shrestha, Jiwan Luitel, etc. is a romantic movie about two long lost childhood friends who gradually fall for each other. Mro Euta Sathi Cha is highly inspired by the Korean movie “A Millionaire’s First Love”. 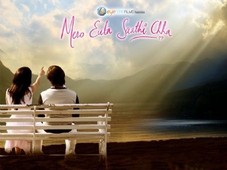 The protagonists in the movie, like in most of the other romantic movies dislike and criticize each other in the beginning and later fall in love with the same person. The rich, arrogant and untamed guy Jay (Aryan Sigdel) is send to a small town for completing his graduation from the local high school. He hesitantly goes there in order to follow his grandfather’s will or else he would lose the inheritance. There he meets Sikha (Namrata Shrestha), a small town girl and his childhood friend he could not recognize. After sometime of hating and disliking her, he starts to care for her. The movie is balanced by romance, sentiments, comedy and fun. The love for the girl changes the rich and arrogant guy into a tamed and caring person. They realize the friendship they shared in childhood and the love that grew in their hearts unaware of the upturn of the fate in their lives.

The movie, although being highly inspired by the Korean movie, has done a good job in terms of presentation. The dialogues resemble the young generations and the present day dialects. The songs are melodious and the performances by the actors are above average, unlike most of the Nepali movies. Aryan Sigdel received the best actor award for his role in Mero Euta Sathi Cha.

If you are looking for a romantic Nepali movie excluding the extra drama and rona-dhona, Mero Euta Sathi Cha is definitely the one.