The voice behind popular songs like Aashu and Cham Cham, Migma Sherpa is a Nepali singer with jolly and relaxing personalities. It’s been more than a decade that he had begun his career. His curiosity about music as a child grew and as he grew up, he came to love music even more. He started singing with his schoolmates in school programs and with his local home friends. His friends used to like his songs and singing style and he grew more interested in it. 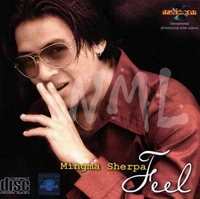 Taking old and new artists from the Nepali music scenario as his inspiration, he started singing out what came naturally from his heart. Some of the legends like Narayan Gopal, Bhajan Siromani Bhaktaraj Acharya, Gulam Ali were his inspiration along with his brother Dawa Tshering who is also a lyricist and a music composer. His first song Bhumarima was, in fact, composed by his brother. He seems to be satisfied with the recognition he has, the fame attached to his name, priceless awards and certificates. Success, for him, is the satisfaction that you get at the end when you do something with your knowledge and talent. Most of his albums titles are related to ‘feelings’ and that is because everything he does, his songs and music comes from the feelings of his inner soul. Although he has played and experienced with almost all the genres of Nepali music, the genre he is most comfortable with is modern song with a classical base.

[youtube]http://www.youtube.com/watch?v=Ugmd0uHrMXw[/youtube] Although he enjoys making music and is very much involved into it, Migma Sherpa is not satisfied with the present scenario of music industry in Nepal and he thinks that positive thinking, respect for each other’s contribution and healthy and fair competitions are required to improve the condition of musical scene in Nepal. He has also gone abroad for various stage performances and concerts and was also a part of a social cause ‘Trip to Katja’, where he performed in front of kids.