Min Bahadur Serchan, the oldest man to climb the highest peak of the world, conquered the summit of Mount Everest in May 2008 at the age of 76 years and 340 day. Although he became broke the previous records, the Guinness Book of World Records had continued to list Japanese climber Katsusuke Yanagisawa (who scaled the mountain at the age of 71) as he oldest man until Sherchan made official appeal in early 2009.

He was congratulated by several dignitaries including the then Prime Minister Madhav Kumar Nepal at a function organized in the capital city of Nepal after he received an official certificate from Guinness. He states his major objective for climbing the peak was for world peace and he was determined to either climb or die trying. The former soldier was quite unknown to the world of climbing and it was his first attempt that itself resulted in victory. Most of the world records related to Everest like the fastest climb, most time spent on the summit and the youngest person to scale it along with numerous climbs are all held by the Nepalese nationals. 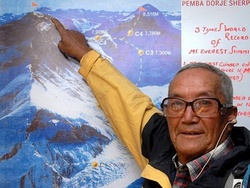 He has the photo of him on the top of the Everest along with his Australian friend and his tour guide displayed proudly in the living room of his house. He beams with pride as he sees holds his certificate and looks at his name, although he could not read it. His name written on the 96th page of the Guinness World Record Annual Book of 2010, an achievement he had been dreaming for fifty years of his life. He had started the fitness training at the age of 72 and when he had gone to see the doctor, the doctor had advised him to stay away from such height as his body could not bear the height of more than 3000 meters. He proved the doctor’s confidence over the health equipment wrong by climbing 5000 meter peak immediately.

He had not shared his intentions with his family, even his wife who came to know about it after he left Kathmandu as he knew they would have tried to stop him. Although his friend and his guide had thought he would get frightened after watching a girl die of jaundice while they were moving towards the Everest, he proved them wrong and Min Bahadur Sherchan is confident and determined to climb the Mt Everest once again at the age of eighty four.