One of the most successful and popular Nepali movie directors, Tulsi Ghimire is popular not only as a director but also as a screenwriter, film editor, cameraman, actor and lyricist. This multitalented director has given many blockbuster hits to the Nepali film industry. One of the most well-known directors of the Nepali film industry, Tulsi Ghimire was born in Sindeybong, Kalimpong in Darjeeling in India. Born to Dhojman Ghimire and Narbada Ghimire, he has two younger brothers and a sister.

He studied at the Mani Memorial Primary School in Sindeybong up to grade two after which he joined Scottish University Mission Institution (SUMI) in Kalimpong where he studied from grade three to eleven and he completed his Bachelor’s of Arts degree from kalimpong College. Married to Bharati Ghimire (Gazmer) who has sung in many of his films, he has two daughters who has also appeared in a Nepali children’s film Swarga Ko Pari’. His brother Shrawan Ghimire is also a successful film producer. 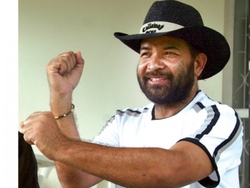 Although he is most popular and successful as a movie director, he is also a successful screenwriter, editor, cameraman, actor and lyricist. This multitalented director had first moved to Mumbai from Kalimpong in 1974 to seek a career in Indian film industry. His mentor and Bollywood editor Kamlakar Karkhanis advised him to make Nepali movies, back then. His first Nepali movie was Bansuri released in 1981. Next, he directed Kusume Rumal which is said to be based on his own story. This movie released in 1985 was a blockbuster. Some of his super hit movies include Kusume Rumal, Lahure, Deuta, Chino, Balidan, Dakshina and Darpan Chaya.

Tulsi Ghimire is a multitalented personality in the Nepali film industry who has not only given biggest blockbuster hits of the all times but has also brought Nepali film industry to lime light and added many milestones in the history of Nepali films. He has also received many awards for his contributions of the films he has created. One of the talented directors, he has also been able to keep the essence of Nepali movies alive by making some story-based movies.