Born on 2000 BS, Gopal Yonjan is one of the popular and talented musicians of Nepal. Belonging to a family that was involved in music, it was only natural for young Yonjan to get interested in the field and choose a career in music.

He completed his schooling from a government school in Darjeeling and enrolled in St. Joseph College in science faculty as his mother wanted to make him a doctor. But his interest in music took over and rather than being a doctor, he became a famous musician. In 2019 BS, he got involved in Darjeeling Art Academy as an instrument player and since then, he started creating music formally. He was a wonderful flute player and he had played flute for a movie Kanjanjunga directed by Satyajit Ray.

He became friends with Narayan Gopal who had come to Darjeeling for a musical tour in 2022 BS. In the year 1967 AD, he came to Nepal with a desire to do his Bachelor in Nepali and also make some music in collaboration with his friends. He joined Tribhuwan University for his studies and took his music and studies side by side. He won the prize for best musician in Modern Music Competition organized by Radio Nepal in 1968 AD where he performed the song Galti Hajar Hunchan. 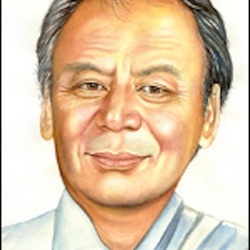 He used to teach in St. Mary’s and St. Xavier’s School where he met his future wife Rinchen. They got married in 2025 BS and had a daughter and two sons. He had also opened a studio named Gopalaya at his home in Basundhara. He used to record his creations and also other singer’s voices in the studio. He had prepared a fusion of band and folk music to perform in the coronation ceremony of King Birendra at Dasarath Rangashala in 2031 BS. But other popular musicians of the time, feeling jealous of him, complained to the then Prince Dhirendra telling him that the music was foreign and it was not appropriate for a non-Nepali citizen to take part in such a ceremony.

He started teaching at Padmakanya College in 1965 AD and by this time, his fusion music was popular around Nepal. He, with the help of Chetan Karki, learned about the western folk music and the music he had collected then is used in the curriculum of Music in Tribhuwan University. He had contributed a lot in the development of Nepali music during the time when the Hindi music had heavy influence on Nepali music. He has played special role in changing the singing style of Narayan Gopal and many other singers of his time. However, some of his songs were also banned and his songs Khukurile lekhieko itihas rato huncha, Galti hajar hunchan, Sabailai rijhau vanda, Ma murda vaeko time aaja hera were some of those banned from being aired in Radio Nepal.

The songs that he created were everlasting that still represents the Nepali music. The melody in the songs were heart touching and the literary words used on the lyrics were able to leave a deep mark to the listeners. He had created music in various genres like folksong, nationalsong, modernsong, bhajan, fusion, children song, film song, sports song, etc. He has also written two books named Sangitanjali and Geetmanjari and has also lend his music to about a dozen movies like Sindoor, Kanchi, Biswas, Mayapriti, Arko Janma, Bhumari, Pahilo Prem.

He has been awarded with Suprabal Gorkha Dakshin Bahu, Chinnalata Geet Puraskar, however, apart from these two, he did not receive any awards or encouragement from the government. He died on Jestha 7, 2053BSafter during the treatment of jaundice in Delhi.