Karma Yonjan, born in Darjeeling, is an enthusiastic musician who made his career platform in Nepal. With his talent, he has emerged to be one of rising musicians of Nepal who has, till date (2012), recorded more than 25 songs at Ratna Recording Company in Kathmandu and over 20 at Radio Nepal with ‘Paleti’ concert series twice in Kathmandu.

Born in Darjeeling, he did not find any difficult to be acquainted with Nepali Music as Darjeeling has become one of the places which has nurtured many artists and gave birth to such talents. During his early childhood, he found himself in a musical environment and was thus, inspired by popular singers of his time such as Mitra Sen Thapa and Ratan Das Thapa. Besides them he was greatly inspired by his cousin Gopal Yonjan, a prominent composer, director, lyricist, singer and Musician with whom he considers to be fortunate to share his childhood. It was Gopal’s father from whom they got the chance to learn about the music and tricks of the trade. After that, they, together with others joined the Art Academy in Darjeeling with the help of its owner Amar Gurung. It was Gurung, who requested all of them to play the instruments and really they played well and Gurung was impressed with them, especially Karma playing the violin. 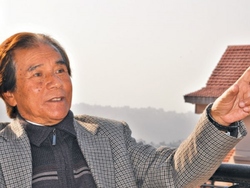 During the course of time, they started to perform in number of places in Darjeeling and it was that time when Yonjan started composing music on his own. He released his first song Sawan Farki Feri Jharyo followed by Samjhera Bujhera which became an instant hit giving him the first taste of success. He then composed music for Narayan Gopal in the song ‘Timro Jasto Mutu’ which gave full shape to him. Yonjan first visited Kathmandu in 1960 to celebrate King Mahendra’s birthday and got chance to perform for King Birendra. He was appreciated and soon he established himself as a brilliant composer in Nepal for his work ‘Hey Phool’, ‘Sarangiko Tarle Mero’, ‘Deurali ka Thito Ho’ and as a stage performer for dramas which became so popular that people would sleep near the counter to get tickets for next day show.

Karma Yonjan, a legendary composer and stage player although born in Darjeeling expressed his love towards nation where he developed his career with lots of talent, faith, confidence and enthusiasm.