Born on 29 November, 1967, Raju Singh is one of the most accomplished musicians in Nepal. Born to father Bhagat Singh, a senior singer in Nepali music industry, Raju was influenced by music in his early childhood and decided do something in the industry. He has completed Masters of Arts from Tribhuvan University, Nepal in the year 1999 (in Economics). He has also completed his diploma from Pragya Sangeet University, India in 1997 and eight level diploma from Trinity Music College, England in 2000. 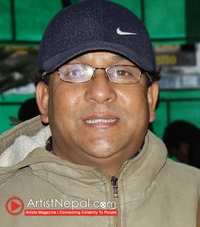 He has directed music for about twenty two of his solo albums and many more with popular Nepali singers for various albums. For the one who has worked as a playback music director in Nepali music, has composed FM Radio stories and serial zingles for TV channels, Raju Singh has also worked as a violinist, keyboardist, guitarist and bassist in Radio Nepal, Royal Nepal Academy as well as Nepal Rastriya Nach Ghar. Most of the songs directed by him are big hits and because of this, he considers himself as a luck favored person. He has given music in more than 500 songs and has released more than twenty albums. He has also judged many musical programs and has worked with all genres of singers ranging from new to old.

He could be contacted at rajusingh675@yahoo.com