A small nunnery in Shivapuri Hill, Nagi Gompa is almost fifty years old. The gompa is quiet and peaceful with occasional caws of the crows and grazing cows mooing near the gompa being the only sound heard. The nunnery is located four kilometers inside the Shivapuri National Park. The view from the gompa is mystifying with the towering hills, fog rolling over the hilltops, the glint of the golden spires of the neighboring gompas and the view of city below it.

There are steps leading around the well-maintained garden and the house for the nuns to stay overseen by a senior nun named Ani Gyan Tara. There are two gompas of the nunnery among which one was renovated and another built by Tulku Urgyen Rinpoche. The smaller and older one, renovated by him, was built more than a hundred years ago and the bigger one named Nagi Gompa was built by him some fifty years ago. His teachings are honored and preserved in the nunnery and the hall within the gompa has a graceful effigy of him blessing everyone. 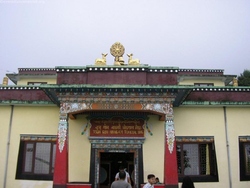 Around 100 nuns, varying from the age of 12 to 90 years, stay in the nunnery and the nuns have come from the places as close as Bhaktapur to as far as Tibet. Despite their caste or place of origin, the women at Nagi Gompa have immersed themselves in meditation and prayer. Although most of the nuns here have come by their will, some (children) are brought by their parents as per the customs followed by Tibetans, Sherpas, Manangis and Lubre caste of Gorkha. The nuns begin their day at 5:30 am with prayers and pujas, read sacred texts and offer rice, water and oil, light incense to Lord Buddha and chant hymns for the next two hours (until 7:30 am). The puja that is performed twice a that starts at 4 pm in the evening as well. The nuns who cannot come to the gompa hall due to their physical fragility stay in their rooms and meditate and pray there. Some nuns also take meditation retreat during which they go to isolated rooms above the gompa and stay there to meditate and pray in seclusion.

The gompa has high ceiling and every inch of it is covered in traditional Tibetan religious art painted in bright colors. The hall is lined with mats, each of which contains a small bell, a bajra, praying beads and a prayer book written in Tibetan in front of them, for the nuns to sit, sing hymns and pray. There are huge statues of the goddess of generosity, Karunamaya, Sakyamuni and his two incarnates, and painting of all the avatars of Lord Buddha adorn the walls and the interior of the gompa along with two huge gongs at the doorway that are played during the chanting and singing sessions. This nunnery laying in the Shivapuri hills accommodates nuns who not only pray for themselves but for the salvation of all the souls.