Nara Devi, the Goddess of Human being

One of the finest examples of Newari architectural history, Nara Devi temple in Kathmandu is a three storied Pagoda style temple that attracts thousands of visitors each day. Nara Devi also written as Naradevi, is composed of two terms, ‘Nara’ meaning ‘human’ and ‘Devi’ meaning ‘goddess’, hence, Nara Devi means the ‘goddess of human being’. And, the people of Newar community call the goddess by the name Ajima, which means mother.

It is said that human sacrifices were done in this temple in past era, however, it is only a rumor spread by Anti-Hindu and Anti-Vedic elements. The locals living in the nearby places make sure to visit the temple regularly.

The temple is built according to the Ying principle or the principle of female energy. It is said that by worshiping here, people get power, courage, spirits, etc. The roof and the walls of the temple are carved with the images of various Hindu gods and goddesses. The temple is crowded with the devotees during the time of Navaratri (Nauratha) and Dashain. The temple holds special power which is believed to be felt by the people entering the temple. 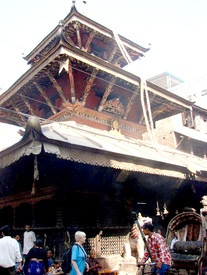 Not only the temple but also the statue of the goddess inside it is a beautiful piece of Newari architecture. It is because of these communities that the Kathmandu valley is known as the city of temple. Because of the presence of the temple, the place itself is called Nara Devi. She is also considered as Kula Devi (familial deity) of some of the Newar community. The locals believe in the power of the goddess and say that the goddess has protected them from various disasters. The goddess protects human from weakness, distress, etc. It is also said that she comes to the dreams of her devotees and tell them about upcoming dangers, problems, etc. She is also considered as the protector of the Kathmandu valley.

Each Hindu temple has great hidden religious and tantric secrets which is why these temples are called Shakti Peethas that means ‘source of energy’. Nara Devi temple also has some secret tantric significance and because of this reason, various tantric ritual and puja are conducted on this temple.

When you happen to pass by the Chhetrapati area, in between Newroad and Thamel, make sure to enter and pay respect in the temple of this ‘goddess of human being’.