Narayan Wagle is a Nepalese journalist and novelist. He has traveled to every nook and cranny of the country, trying to understand the people’s lifestyle and writing about them.

He was the editor of Kantipur Daily, one of Nepal’s most circulating newspapers until 2008. Currently, he is the editor of Nagarik Daily. He is most known for his book, Palpasa Café. 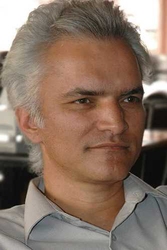 Palapsa Café was Naryan Wagle’s first book. It was published in 2005, and subsequently translated to English and Korean. The book was a best seller and it won Wagle the Madan Purashkar in 2005.He published his second book The Mayur Times in 2010.

Both his books are based on the same theme: the Nepalese Civil War. They are acclaimed for bringing the realities of the war to the public in a way journalism had failed to.

Wagle has become the first Nepali novelist to have his books officially released in Kindle version. His books are also available in eBook formats like mobi and pdf.