The dreadful event that left the whole nation stunned, Nepalese Royal Massacre, also called Narayanhiti Palace Massacre, occurred on 1 June 2001 at the Narayanhiti Royal Palace, the then residence of the Nepalese monarch. Nine members of the royal families were killed and many injured in the massacre which is said to have masterminded and executed by the heir to the throne Crown Prince Dipendra Bir Bikram Shah Dev, who also killed himself. However, the majority of Nepalese citizens disapproves the reports presented by the government and still thinks that is was all a set-up to dishonor the Crown Prince and finish the then royal family of Nepal.

Although Crown Prince Dipendra was declared as the king when he was in coma, after the death of his father, it is often said that he was already dead before being declared as the king. After the massacre, the kingship went to Prince Gyanendra, brother of King Birendra Bir Bikram Shah Dev. The reports states that Dipendra was drunk and was misbehaving with a guest when the King finally asked him to leave the party. He was taken to his room by his brother Prince Nirajan and his cousin Prince Paras, who later became the crown prince. After an hour, Dipendra returned to the party carrying H&K MP5, a Franchi SPAS-12 and M16 and fired single shot into the ceiling before aiming at his father, King Birendra. Then, he shot one of his aunts and turned to his uncle Dhirendra. Prince Paras, during the shooting, suffered slight injuries and managed to save at least three royals, including two children by pulling a sofa over them. As Prince Dipendra came in and out of the room firing shots, his mother, Queen Aishwarya, who had come to the room when the first shots were fired, left quickly looking for help. She along with the younger Prince Nirajan were shot dead in the garden of the palace and from here, Dipendra proceeded to a small bridge over a stream running through the palace and shot himself. 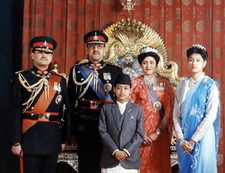 However, Lamteri, a junior army staff at Narayanhiti Palace claimed that he saw Crown Prince Dipendra in his private room in a drunken state with six bullet shots on his back and one of the left hand before the royal family was killed.

Gyanendra had maintained that the death were the result of an ‘accidental discharge of an automatic weapon’, while Dipendra lived, however, after Gyanendra ascended the throne, he stated that he had made the claim due to ‘legal and constitutional hurdles’ as Dipendra could not have been charged with murder if he had survived. An investigation on the case proved Dipendra to be responsible for the killing. The cause of the massacre is said to be the marriage dispute that the Crown Prince had with his mother. His mother was against the bride, Devyani Rana (daughter of Pashupati SJB Rana) he had chose for himself. Both the family had a rivalry that was deep rooted, however, the inter-marriage between these two clans had been practiced for a long time in Nepal.

Although the reports said otherwise, most of the people who knew Crown Prince Dipendra closely say that he would have given up the throne for the sake of his love but he would never have committed such deed. Also, many facts and evidence reported by the investigation team of two member Keshav Prasad Upadhaya, the then Supreme Court Chief Justice and Taranath Ranabhat, the then Speaker of the House of Representatives, were contradictory in many aspects. Moreover, many books were also written on the plot and the aftermath of the massacre. However, the massacre still remains a mystery as the Nepalese citizens have not yet got answers to their questions and the Nepalese Royal Massacre would always be an unsolved, mystery as the building Tribhuvan Sadan, where it took place, was demolished by former King Gyanendra.